Chris Wittman, a fourth generation Floridian has been toting a fishing-rod since he was young enough to walk. In 1999, Chris began his guiding career and founded his independent outfit: Stillwater Charters. In the early years of his guiding, Chris possessed an insatiable desire to progress as an angler, and deepen his understanding of all aspects of the sport. In 2001, Chris began entering Redfish competitions, and not before long he was palling around with a camera crew filming for ESPN’s ‘Saltwater Sundays’.

Alongside guiding, Chris traveled from the waters of North Carolina, all the way to the Coasts of South Texas chasing anything that would take what was on the end of his line. This stint lasted for almost 10 years, and greatly aided in his guiding, both in his pursuit of fishing knowledge, as well as his name recognizability amongst potential clients. It was with this momentum, that Chris eventually used to hop into the producer seat for a show called, ‘Wild Instinct Outdoors’, which aired on the Discovery Channel in 2015. 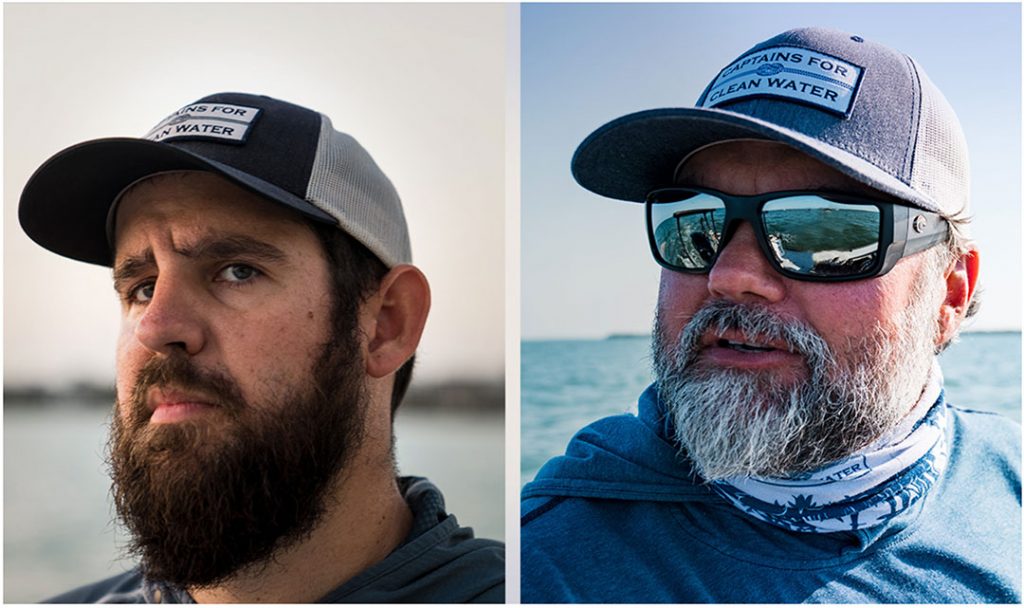 It was around this time that he began working alongside, guide Daniel Andrews. Daniel, the now Executive Director at Captains for Clean Water, was a young guide who had more than just some skin in the game. Around 2009, Daniel had been accepted into FGCU on a full ride scholarship. After attending just one semester, Daniel decided that his time would be better spent standing on a skiff than sitting in a classroom. In 2010, Daniel became a full time Florida Guide.

“I remember seeing him and thinking that he was a perfect example of the next generation of Florida fishing guides”, reflected Chris, “He was respectful and eager to learn. He paid his dues, and most importantly; he went out and did the work himself – he wasn’t looking for any handouts”. Daniel’s career was off to a hot start, but for both him and Chris, the warning signs of a declining fishery and environment were becoming ever increasingly hard to ignore.

“If you’re going to be a good guide, you need to be ever present to every little thing going on around you”, explains Chris. “We knew the fishery was in steep decline, but to be honest, we didn’t know what we could do”. Chris and Daniel collaborated on solutions and searched for support groups to aid in their efforts. “It really hit me after getting off a call with Bonefish Tarpon Trust’s head scientist where he suggested that unless things look up, I should start looking for another job”. So, Chris did just that.

In 2016, Chris and Daniel to the leap of faith, and traded in their sun hoodies and flip flops for blazers and khakis and headed to their local lawmakers front doors. “We hopped in our trucks and headed to Tallahassee to condemn the faulty legislature which we felt was the root of the problem”, recalls Chris. “Nothing came of it. That’s when we got really fired up”. From there on, the flame was lit, and Chris and Andrews worked day in and day out to create what is now, ‘Captains for Clean Water’.

“In the beginning, the community was skeptical that they could have an impact on fixing such massive problems and had concerns that bringing attention to the water issues would hurt their businesses. Today the community is more vocal and involved than ever before. They realize that if we don’t bring attention to the water issues, these problems won’t get fixed and their businesses will suffer”, Chris states addressing their initial startup.

“We knew we had to get people involved and vocal to pressure policymakers to implement long-term science-based solutions, but we were fishing guides. We didn’t know anything about starting an organization. We also realized very quickly that if we were going to be successful it was going to require all our time and effort. The reality of that was that if we were going to be effective, we would have to quit our dream jobs and dedicate our lives to this fight. That was not as easy decision but one that had to be made”.

“The reality of that was that if we were going to be effective, we would have to quit our dream jobs and dedicate our lives to this fight.”
Parallax

Today, Captains for Clean Water is on the forefront of Environmental reform in Florida and surrounding areas. “The biggest hurdles we are currently facing is getting the legislature to implement significant legislation to hold polluters accountable and working to speed up the painstakingly slow processes of government and bureaucratic agencies. We need to get more people involved to create greater pressure and drive political will”, explains Chris.

In the pursuit of truly driving change and making the world a better place for their future children, Chris and Daniel fight harder than ever before. With monumental feats accomplished, but endless progress yet to me made; these two are the captains on a course for a better world, better water, driving change.