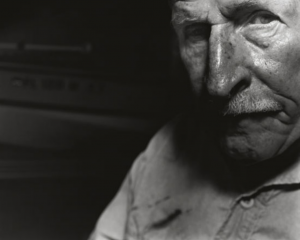 Marshall Cutchin relayed the sad news yesterday morning on MidCurrent that Bill Curtis, one of the legends of Florida Flats fishing whom many credit with the invention of the poling platform, died Friday at the age of 91.

I had the amazing opportunity to fish with Bill for three days in 2003, as Andrew Steketee and I were producing the book Tideline.  It was a lesson in humility.  Bill was a gracious man, and he was a patient teacher.  I will always remember listening to him describe the tarpon migration as he poled his bright yellow “Grasshopper” skiff (in his late 70s) around the point in Biscayne Bay that had been named after him.  He shared stories about fishing with Ted Williams.  He explained  how he used to push his boat around with a wooden handrail, standing on the motor for a better vantage point… the motivation that led to his thinking up a platform system.

On that trip, a giant permit swam into view, and I was on the casting deck.  I made what I thought was a perfect shot, maybe 50 feet, leading the fish (which looked like a metal trash can lid finning under the surface) by about four feet, and maybe a foot or two past the track it was following.  I made a couple strips, sure I was about to hook that permit, but the fish turned a button-hook and cruised off.  By the time I could turn around and ask what went wrong, Bill was already climbing off the poling platform, muttering under his breath.  He saw the exasperated look in my eyes and simply said:

“Permit aren’t used to their food attacking them.”

Blunt words.  Clear message.  They’ve stuck with me ever since, and not only do I hear them still as I fish a variety of situations in fresh and saltwater, I often use that tip in things I write and guide trips I lead myself.  I’m sure there are thousands of people who have heard that little piece of advice by now, and it started (for me) with Bill.  A lot of the lessons I apply to my fishing started with Bill.

Bill had an impact on many of us, whether we realize it or not.  This industry was lucky to have him, and he will be very sorely missed.