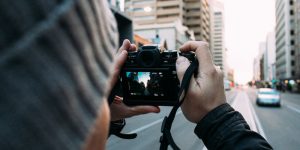 While I don’t love using stock photos for websites we design, they’re often a necessary part of my world. I’m adamant about securing the rights to all the images we use no matter how small. That’s why I was surprised when I received the following email from a client website I built a few years ago:

“I just noticed that the photo you have displayed as your background/cover photo for the ‘Join or Renew’ page is a photo of mine. I’m curious as to where you found this image and why my permission was not sought for its use?”

Bad way to start the week. A quick search revealed that this particular photo was purchased on Istock. Not a problem I thought, I’d just head to istock, look at my purchases, and send the rights back over to the photographer. Once on Istock, I didn’t see the photo—anywhere. It wasn’t on the site, it wasn’t in my purchases, it’s like it just disappeared. But I knew it was an Istockphoto because of the file name. My panic level started to spike.

So I called customer service to see if we could figure out the issue. After a few minutes with support it turns out the photographer who owns the rights to the image pulled it from istock a few months ago. That basically removed all versions of the file from the site including in my purchases. The only way I could prove I had rights to the photo was to send a screenshot of an archived version of my account that shows the photo was purchased. Luckily Istock provided that to me. I forwarded that to the photographer and pulled down the photo. I’ve never had that happen in over 9 years of working in the web industry.

What I can’t figure out is exactly why the photographer pinpointed us. My best guess is he was doing a Google search for the image and contacting all the websites that have that image to hit them up for cash.

As the owner of the photo rights and the guy who removed the photo from istock, one would think he knew where the photo came from. When you send an email with a message like this: “I’m curious as to where you found this image and why my permission was not sought for its use?” You’re looking for something. An email along the lines of I removed this photo from Istock and would like you to pull it from your site as well, seems more appropriate.

The moral of the story? Keep track of where you purchase your images, never use anything you don’t have permission to use, and always ask questions before you blindly pay someone. The web may seem like a big place, but it’s smaller than you think.