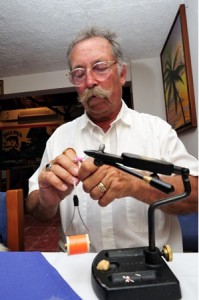 From the International Fly Tying Symposium:

In a summary report of attendance and sales at the International Fly Tying Symposium, show producer Chuck Furimsky wrote that the pre-Thanksgiving weekend event was a harbinger of “great days ahead for fly-fishing industry sales.”

Furimsky’s report, read, in part, “…There was no need to wait for national retail [sales]reports after Black Friday because we knew the results after the symposium in Somerset, NJ . . . an event that represents the ‘canary in the mine’ test and predicts how the winter Fly Fishing Show season will respond. The canary sang loud and clear.

“Exhibitors had one of their best symposiums and saw attendance up 25% from an average year. Super Storm Sandy had left her mark on New Jersey and many expected a slow symposium. That was a wrong prediction pleased everyone. Instead of quiet and conservative shoppers, the aisles and tiers were mobbed. The new expanded location at the Garden State Exhibit Center proved a great move. The symposium theme did not compete with the popular Somerset January Fly Fishing Show and continues to remain fly tying’s premiere event.

“Plans for the 2013 Symposium are to return to the exhibit hall with the opportunity to even grow further. The theme will be “The Dutch Masters.” In our first symposium, many of the great tiers from the Netherlands came; now they and others are

planning for next November,” he concluded.