By David A. Rose

Several of my good friends are also some of the greatest fly fishing anglers and guides in the United States. They’ve taught me things I never knew I should even know about catching fish. By far, they are rebels of the sport; their thinking outside the box has led to cutting-edge innovations the common fly angler will eventually consider trying out.

But one unexpected lesson I learned was how much of the equipment they use in their quest to catch fish with feather and fur is not the normal gear marketed towards flingers of flies. The biggest problem for these counselors of the roll cast? They have difficulty locating these products in their local fly shops (sometimes even local retailers of general sporting goods), and they’ve had to resort to perusing the Internet to get what they need. That’s profit lost to storefront owners unwilling to overlook the stigma carrying of non-traditional fly-oriented equipment.

The following are items not normally found on the shelves of fly shops that, when marketed correctly, will not only boost profits but have your clients realizing your shop is as cutting edge as the gurus who first used them. The shop owners I know that have carried them have been pleasantly surprised by the results. Stock them in your store and you’ll be pleased, as well. 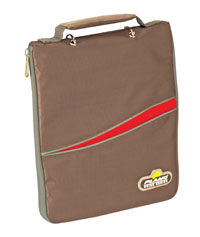 Plano’s model 4610 Guide Series Worm Wrap
www.planomolding.com
Although the name of this product tells a different story, the truth is the Worm Wrap manages over-size streamers and surface flies all too well. This 9-1/2” by long 1-1/2” wide by 12-1/2” high organizer comes with 8 zip-seal see-through bags, held in place with non-corrosive metal grommets, and stores flies to 12 inches long in strait form without damaging them. Four zippered and two open interior pockets are perfect for toting leader material and other essentials. The wallet is thin enough to fit the large interior or back pockets of a vest, and tucks nicely into a boat’s dry storage. Price is suggested at $19.99 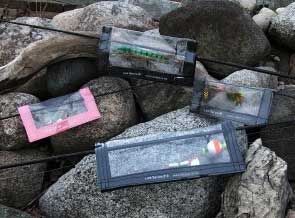 Generation 2 LureSecure lure wrap
www.luresecure.com
Nothing sucks more than a sharp saltwater hook in the hand. I won’t tell you how I know. If the big fly had only had a Lure Secure lure wrap covering it while it was fastened to the rod’s hook keeper I’d have been in much better shape to cast later in the day. New this year, the Generation 2 LureSecure is made of a new light-weight UV-resistant Polyethylene film that’s poke proof, as well impregnated with a rust inhibitor, so rusty hooks and sun-bleached Flashabou will be things of the past, as well a bandaged hand. The 7” X 4”, 9.5” X 5” and 11” X 5” are $10.99, $12.99 and $13.99 per two, and the monstrous 10” X 7.5” and 21” X 7.5” models are packed singly at $10.49 and $13.99.

InvisaSwivel
www.aquateko.com
When a big fish rocks a fly’s world, it often rolls so much it ruins a tippet and fly line useless a matter of moments. But swivels of heavy metal wreck fly action, add weight, so are plain ol’ taboo when it comes to fly casting. Enter the InvisaSwivel. Manufactured from a fluorocarbon-based material called “Fluoro-Clear”, this swivel disappears into fluorocarbon leader material as if it weren’t even there, and it’s nearly as neutral buoyant as the leader itself. The swivels come in pound-tests from 12 to 55 (packages 5 each) and 80 through 200, (packaged in 3’s) and are priced at $4.99. 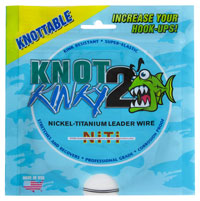 Knot2Kinky nickel-titanium wire
www.aquateko.com
Finned toothy critters thrive that can cut a fly off in one chomp. While steel leader material you can tie a knot in to is nothing new, wire leader material that can be knotted and stretches is. And after the leader stretches, it rebounds back to its original form, and is kink-proof and will not corrode. This makes it marvelous both fresh and saltwater marauders. Knot2Kinky comes in 15-foot lengths and retails for $8.99 to $17.99 for 25- to 100-pound test, respectfully, with five other tests in-between.

Thill Center Slider Float/Eagle Claw Bobber Stops
Lindyfishingtackle.com/eagleclaw.com
Rapidly roiling water rarely bodes well when drifting egg patterns under a
dainty strike indicator. Neither does drifting slow, deep holes holding salmon
and steelhead. Popular with anglers of the Midwest was Thill’s Ice ‘N Fly Special
Float – held tight to the leader by pining it. The company’s Center Slider Float,
however, allows a fly to slide into the strike zone no matter how deep, and
suspends a fly in place no matter how churned the current. At a mere $1.92 to
$2.87, this float will flow off your pegs. Place a few Eagle Claw bobber stops next
to them, and at $1.40 for a 10-pack you’ll see them move, as well.