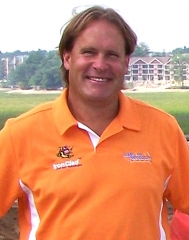 McLEAN, Va. (January 18, 2011)—Angler/entrepreneur Ben Hobbins of Madison, Wisc. is the latest appointee to the Future Fisherman Foundation’s board of directors.

In 2010, Outdoor Life magazine recognized Hobbins “Innovator” in its “OL 25,” a group of men and women who have had significant positive impact on hunting and fishing. Outdoor Life said, “Hobbins’ invention of the eco-friendly IronClads soft plastic lures showed that lake and stream clean-up, through tackle innovation, could come from within—from the anglers themselves—rather than from outside groups, reinforcing the idea that sportsmen’s sanctuaries should stay in the hands of sportsmen.”

Hobbins is a lifelong outdoorsman and conservationist. In addition to his job as chief executive officer of the Lake Resources Group, which manufactures IronClads™ lures, he serves as executive director of the American and Wisconsin Youth Entrepreneurs Network and as a board member on the FishAmerica Foundation’s Conservation Committee.

Hobbins also is co-founder of the Lake Delton Fisheries Restoration Project, which helped rebuild, refill and restock this southern Wisconsin lake that was destroyed during a dam breach and flooding in 2008. In June 2010, to highlight and celebrate the restoration of the lake area and fisheries, the organization sponsored Lake Delton’s “1st Annual Fishing Jamboree” for youths under the age of 16.

“Mr. Hobbins’ résumé of accomplishments makes him an ideal person to help further the Future Fisherman Foundation’s mission of promoting fishing as a happy, healthy lifestyle and increasing the number of people who become lifelong, conservation-minded anglers,” said F3 executive director Keith Sutton. “He’ll be a welcome addition to the dedicated group of individuals already serving on F3’s board.”

Established in 1986, the Future Fisherman Foundation unites the sportfishing industry and a nationwide network of state outdoor educators, national conservation groups and youth organizations dedicated to introducing America’s youth to angling and the outdoors. These efforts help people of all ages have safe and enjoyable fishing experiences that foster conservation ethics.