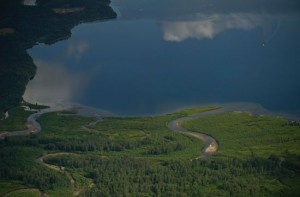 Just weeks after the U.S. EPA released comments critical of Pebble’s Draft Environmental Impact Statement, the agency today withdrew the 2014 Proposed Determination. If finalized, the Proposed Determination would have safeguarded the Bristol Bay region – the world’s greatest wild salmon ecosystem – from the proposed Pebble mine and other large-scale industrial development by placing limits on the amount of mine waste that can be disposed of in Bristol Bay’s rivers and wetlands.

In response to today’s step by EPA, sportsmen and women issued the following statement:

“Sixty million fish can’t be wrong. That’s how many sockeye were sustainably harvested from Bristol Bay last year. That’s the resource that is being put at risk by this unjustified and fundamentally boneheaded decision. We have spent $18 billion on unsuccessful efforts to try and recover salmon in the Columbia and Snake Rivers, meanwhile Alaska’s resource is outstanding and all we have to do to keep it intact is have the good sense to leave it alone. We will look at all options—including litigation—to protect Bristol Bay from large-scale industrial mining.”

“Withdrawing an action that would have protected the rivers and wetlands that dozens of businesses depend on hinders American jobs and economic growth and is an attack on hardworking families. The proposed determination was supported by thousands of Alaskans and millions of Americans. Our state elected officials need to step in and make sure the best interests of Alaskans, not a foreign owned mining company, are being put first.”

“This action directly undermines Alaskan businesses like mine and favors a foreign mining company. It is absurd that the 404(c) action, that was widely supported by so many Americans, is being walked back for such baseless reasons. Now, more than ever, is time for Alaska’s elected officials to stand up for the families and communities that are out here and make sure the resources we depend on are around in the future.”

“This foolish decision fails on all accounts. It neglects EPA’s responsibility to protect human health and clean water, it ignores science-based criticism of Pebble’s permit review by their own scientists and other agencies, and it is out of touch with the priorities of Alaskans and sportsmen and women. It’s common sense to limit mine waste disposal in a place as important as Bristol Bay. It’s an all hands-on deck situation to safeguard this important American asset and the thousands of jobs it supports.”

Trout Unlimited is the nation’s oldest and largest coldwater fisheries conservation organization dedicated to conserving, protecting and restoring North America’s trout and salmon and their watersheds. In Alaska we have thousands of members and supporters including dozens of businesses that depend on the Bristol Bay fishery. Follow TU on Facebook, Twitter, and Instagram and our blog for all the latest information on trout and salmon conservation. For more information on the Save Bristol Bay campaign go to SaveBristolBay.org.