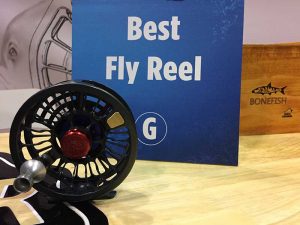 I cannot tell a lie: I really missed IFTD in Orlando this year. I know I’m not the only one, because there are plenty of anglers like me who are as passionate about fly fishing as they are conventional angling. I’m the guy who strips streamers for browns one day, and then jigs for tuna the next. I’m the guy as excited to check out the latest topwater frog as I am the newest tying materials. I’m also perfectly willing to admit that over the last four years, I found myself wandering IFTD just hair longer than the ICAST side, because part of my job at Field & Stream is covering the coolest new tackle, and the fly side often comes up with stuff I personally find more interesting. There, I said it.

But the fact is, my schedule just won’t allow me to visit both shows, which means my run at IFTD may sadly be over until maybe, someday, we can all just get along again. At ICAST, on the other hand, my attendance is mandatory, so if you’re wondering what—if any—fly vibe remains on that side of the fence with IFTD headed back to Denver, here’s what I saw.

Save for a few foreign companies pushing commercially tied flies, the only fly tackle I bumped into was made by companies that also produce tackle for the conventional world, and in truth, most of these companies never had dual citizenship even when IFTD was in the same building. Even with several notable brands at ICAST, the fly gear’s presence was muted. One lonely rack of G. Loomis fly rods was displayed with little prominence at the joint Loomis-Shimano booth where hundreds of show-goers flocked to get a look at PowerPro’s new black light-reflective braid and Shimano’s SLX DC baitcaster featuring a digitally-controlled breaking system.

For the second year in a row, St. Croix took the prize for best new fly rod, last year with their Mojo Trout series, and this year with the Imperial Salt line. Unlike Loomis and a few other brands, St. Croix always aims to put their fly rods in the spotlight at ICAST, never leaving them out of a product walk-through at their booth. What I often wonder, however, is if the fly world even puts that much stock in ICAST wins versus IFTD wins. After all, it’s largely a bunch of conventional anglers voting, right? We’ve got night crawler dirt under our nails.

This little caveat doesn’t bother Wes Seigler of Seigler Fishing Reels. Last year, he displayed on the ICAST side of the show, though I couldn’t help but notice his booth was very close to the IFTD border. Seigler produces conventional reels as well, but his lever-drag fly reel is what caught my eye in 2018. It won best new fly reel that year. This year, his smaller Seigler SF fly reel took that honor. It was incredibly deserving of the title, no doubt, but it also wasn’t a surprise.

When I looked at the SF’s competition at the new products showcase, I knew Seigler would score again. It was up against new reels from Cortland, Pflueger, and Temple Fork—all crossover brands. The common thread among them was that they all priced at $250 or less. There was also a large-arbor saltwater reel in the running from Chinese company Yangzhou, which I found out later sells primarily on Alibaba.com. That one kind of doesn’t count, but the others being affordable often hurts more than it helps with ICAST voters, especially when there’s a serious machine in the mix. Seigler’s reels are all made in the U.S. They’re not cheap. But they’re also grade-A army tanks built with extreme precision. And generally speaking, even if the Casio has a smart design while being affordable to a lot more people who want to know what time it is, the Rolex takes the bacon.
Surprisingly, Seigler told me he does much better at ICAST with regard to foot traffic and his fly reels. “There are a lot of fly anglers here. More than people think,” he told me. “And since there’s not much fly gear, those people are really looking for it.”  The handful of times I passed Seigler’s booth, despite a large spread of conventional reels to crank on, it was one of his fly reels that was always in someone’s hand.
I suppose it’s fair to say that I’m one of the people Seigler’s talking about now that the shows have split, wandering around and ogling buzzbaits and crawfish until something fly catches my eye. It’s like a little consolation prize for the dude that can’t make Denver, and I enjoy those little prizes, though I must admit that for a fly-only company, ICAST would be a hard party to attend. Yes, you’ll probably dig the music, but it would take an incredible amount of booth beer and swag to pull the masses away from wherever Mike Iaconelli is beat boxing.