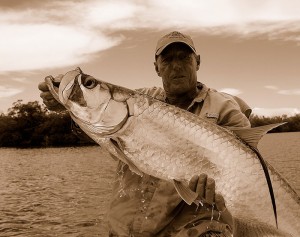 From The Fly Shop:

The Fly Shop is thrilled to announce the hiring of Eric Ersch as a fly fishing travel specialist.

Ersch brings a wealth of field-gained fly fishing experience having fished, guided and managed some of the most famous fishing lodges in the world. His on-the-water experience spans decades, and includes the Kola Peninsula of Russia, the Bahamas, Mexico, Alaska and Panama. Eric managed Big Ku Lodge in Alaska for the past two seasons, and prior to that was manager of Paradise Lodge in Mexico’s Yucatan Peninsula.

Eric’s background includes guiding fly rodders on the flats for tarpon, bonefish, snook, and permit. Offshore, he has guided anglers to fly rod caught sailfish, roosterfish, dorado, yellowfin tuna and cobia. His specialty is exploring and developing sustainable sport fisheries in remote locations. Ersch was in Panama on the Island of Coiba in 1979, teasing sailfish to the boat for Winston Moore, a true pioneer in salt water fly fishing. During the 80’s he was in remote western Alaska, developing fly fishing techniques with Bob Stearns and Chico Fernandez. Eric is equally at home running a jet boat on a wilderness river, poling a flats skiff in skinny water, and navigating blue water in search of pelagic species. The Fly Shop is proud to bring Ersch on board to join their world-class team of fly fishing travel experts.

I have known and worked with Eric for close to two decades, and his well-rounded background in both salt and freshwater fly fishing, and years of on-the-ground field experience makes him the perfect candidate to assist our friends and clients with their travel needs. He’s been involved in just about every facet of the industry, from wrenching on outboards in the Alaska Bush, to formulating complicated itineraries and travel logistics to Panama. Eric’s a hands-on guy who is happy to share what he has learned and experienced from decades of fishing and travelling the world. He’s our kind of guy! – Pat Pendergast, Director of International Travel, The Fly Shop.

The Fly Shop, located in Redding, California been in business for 38 years and one of the largest and most successful independent brick and mortar fly fishing companies in the world. In addition to publishing a 170 page full color catalog mailed to more than 200,000 fly fishers annually, they operate a full international travel department that services in excess of 2,000 fly fishers a year, a local Northern California guide service, fly fishing schools, as well as kids and family fly fishing camps. For more information, visit their full interactive website at www.theflyshop.com