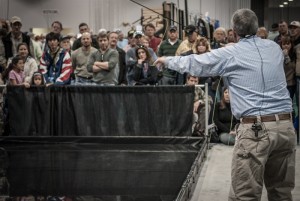 If anyone wants to gauge the health of the fly-fishing market, all they really have to do is take a close look at The Fly Fishing Show series as it makes its annual winter tour throughout the country. This upcoming weekend’s Somerset, New Jersey, show is expected to break attendance records. Both of the main hotels at or near the venue are sold out. And perhaps most importantly, the weather woes that crippled the Mid Atlantic region last weekend are slowly dissipating. If you are already planning to exhibit or attend, good luck and have fun. If you’re in the area and are still thinking about it, check it out. Event details can be found here.

For the record, Chuck Furimsky noted that the Denver show went great. “We had a film event with 450 seats, and people had to get extra chairs from our seminar rooms to squeeze in,” he said.

In Marlborough, Massachusetts, exhibitors dodged the weather bullet, though on Sunday, the crowds were thinned as the locals were focused on a certain AFC football game. “But I still had one exhibitor tell me he did more business on Friday than he did in all three days the previous year,” added Furimsky.

On Super Bowl weekend, the Fly Fishing Show will head to Carolina, though that event is scheduled for Friday and Saturday only, and won’t conflict with the big game.

Maybe you folks in Cleveland should talk to The Fly Fishing Show about making a stop in your city, at least if you really want to get the Browns back in the playoffs. There does seem to be a theme here, after all.