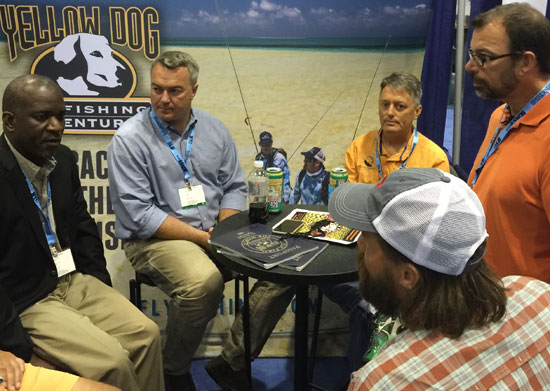 IFTD meeting among lodge owners, travel companies, and representatives from the Bahamas Ministry of Tourism.

Charlie Smith, inventor of the famous “Crazy Charlie” bonefish fly, is often credited with putting Bahamian flats fishing on the map for many Americans. Apparently, his son, Prescott, might ultimately be credited for taking it off the map, at least for do-it-yourself anglers.

The proposal to limit foreign lodge ownership, shut down DIY angling (which accounts for 60 percent of the fishery related economy) spearheaded by Prescott Smith and other Bahamian guides, is still very much alive. Now it is headed to a vote by the government.

At a meeting at IFTD among lodge owners, travel companies, and representatives from the Bahamas Ministry of Tourism, there was some hope that cooler, more rational heads would prevail on this issue.

As AT stated before, we can understand the beef some Bahamian guides have. Some changes may well be in order. A license fee, for example is something most visiting anglers would gladly pay. But this could have a devastating effect on the angling tourism trade in that part of the world.

For the most reasoned, carefully thought commentary and recommendations on the matter, we suggest following the Bonefish & Tarpon Trust. Here’s what BTT says on the matter now:

As many know, the Bahamas Ministry of Agriculture, Marine Resources and Local Government recently released draft proposed regulations for the bonefish fishery. We praise the Ministry for taking on the challenge of devising a new plan for the economically and culturally important bonefish fishery.

Bonefish & Tarpon Trust provided comments that focused on the need for a comprehensive conservation and management plan that incorporated the threats of habitat loss and degradation. Many others in the flats fishing industry also provided comments.

As a follow up to previous position statements, BTT has collaborated with many in the flats fishing world to craft a revised approach to creating a comprehensive conservation and management plan for the Bahamas bonefish fishery. The recommendations are intended as constructive contributions to the ongoing efforts, not as a proposed management plan. All those who have signed on to this document have an interest in the long term health of the fishery, and from many different perspectives – guides, lodge owners, travel outfitters, fishing trade associations, conservation science. It is notable that this diverse group reached a consensus on this document as a focal point for moving forward. The hope is to find a comprehensive conservation plan that includes conservation, education, and enforcement that will ensure a healthy bonefish fishery for the future.