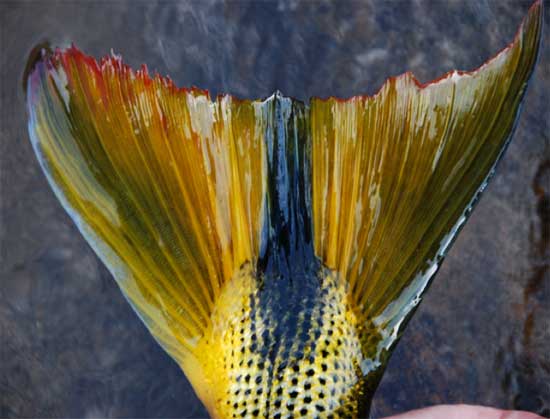 A new study launched this month by University of Massachusetts Amherst fisheries biologist Andy J. Danylchuk, in collaboration with Argentina’s Ministry of Environment and regional partners including Juramento Fly Fishing, Tigres del Rio, Fish Simply, and Patagonia Inc., is the first to assess the impact of catch-and-release fishing and other human and environmental pressures on the golden dorado, a fish of high economic and recreational value across South America.

Data obtained from this project in the Salta region of northwest Argentina will be used to develop conservation strategies, proactive management and sustainable fishing practices for this iconic species. The project is also expected to contributute to greater sustainabilty for the regional ecotourism industry and the economic livelihood of local fishing guides.

As Danylchuk explains, “Little is known about how golden dorado respond to being caught and released, yet understanding this can lead to best practices anglers and guides can use to make sure fish swim away in the best shape possible.” Danylchuk, his graduate students and local stakeholders are also radio tracking golden doraro to look at movement patterns after fish are caught and released. He adds, “It is a challenge for emerging countries, because fishing tourism can represent significant income.”

The golden dorado is the so-called “charismatic” fish found in the rivers of Brazil, Paraguay, Uruguay, Bolivia and northern Argentina that draws recreational fishermen from around the world and represents an important economic support to local communities. But it faces strong pressure and population declines due to over-harvesting and habitat degradation from such human activities as mining and poor sewage treatment. Danylchuk points out that scientists need much more information to understand its ecology.

Francisco Mariani, manager of Fly Fishing for Patagonia Inc. in Buenos Aires, says the goal of the study is for the public, fishermen, government and tourism institutions of the region to work cooperatively and understand each other’s needs to achieve a collaborative, sustainable long-term fishing and tourism economy.

Danylchuk’s study will measure impacts of catch and release through factors such as fight time, air exposure and fishing method, as well as evaluate the correlation of these with physiological biomarkers such as blood lactate, blood glucose and blood pH. The researchers will also survey residents, fishermen, tour guides, sport fishing operators and government officials about the importance of golden dorado and potential conservation challenges they face.

The first week of the study produced over 15 golden dorados caught by recreational anglers and industry representatives of Ambassadors for Patagonia, Inc., Fly Fishing Nation and Solid Adventures in a stretch of the Rio Juramento in Salta. This work will continue over the next few months and form the basis of long-term research and conservation intitiatives by Danylchuk and other local, regional, and international partners interested in the sustainability of the golden dorado recreational fishery in South America.