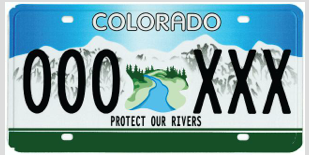 On Tuesday, April 9, the bill to establish a Protect Our Rivers license plate passed its first committee – Senate Transportation – on a unanimous 5-0 vote. The bill next passed Senate Appropriations earlier this week on a tighter 4-3 vote, and could come up for a vote on the Senate floor before the end of the week. Once authorized by legislation, the plate will be available to all CO residents through a tax-deductible contribution of $25 to Colorado Trout Unlimited (plus payment to DMV for the physical plates themselves). 100% of the funds donated will be used locally to protect, conserve and restore Colorado rivers.

You can help today by calling your state Senator and urging them to vote for the Protect Our Rivers license plate.  Tell them that a plate to celebrate Colorado’s rivers is a good idea, and will help raise much-needed funds to reinvest in river conservation projects.

We secured more than enough signatures in our prior effort to establish this plate, but feel free to sign the petition if you would like to be kept apprised of the bill’s progress and availability of the plate via email. And thank you for supporting Colorado’s rivers!