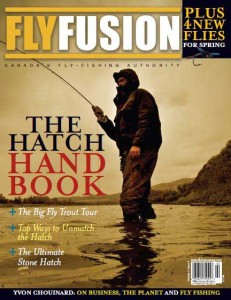 CALGARY – March 23rd, 2010 – Bird Marketing Group (BMG)*, the leading Canadian authority on fly fishing in North America is pleased to announce that industry design veteran Michel Groleau has been selected to assume art direction responsibilities for Fly Fusion magazine. In this role, Michel will oversee all design and pre-press aspects of the printed magazine and will report directly to the Publisher.

With over twenty years of experience in magazine design, Michel has worked on such titles as Commerce, Montreal Magazine, InfoPresse, Affaires Plus, Croc and Le Trente. He has been nominated twice for the Canadian Newsstand Awards and recently had his design work with The Beaver: Canada’s History Magazine featured on The Colbert Report.

“We are very much looking forward to having Michel join our team”, says Fly Fusion Publisher Jennifer Bird, “His experience within the Publishing industry will be an asset as we continue to aggressively grow our brand and market share in the North American marketplace.”

Fly Fusion magazine’s founding Art Director, Terry Paulhus, will settle into his new role as Director of New Media effective immediately. In this new role Paulhus will oversee all of BMG’s web properties which include a new digital version of Fly Fusion magazine scheduled to be launched early in the fourth quarter of this year. The new digital version, which will compliment the established printed edition, will utilize advanced digital magazine technology and will be supported by BMG’s established social media fly-fishing network. Paulhus will report directly to BMG’s Group Publisher, Chris Bird.