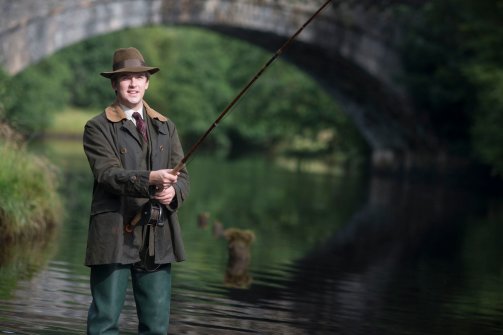 Barring any miraculous interventions Dame Maggie Smith might have up her billowing sleeves, Matthew Crawley, the young heir of Downtown Abbey, is dead.

One could identify a number of plausible reasons to relish in Matthew’s demise:  his perfectly combed hair (even in the foxholes), his smirk that wavers between knowingness and idiocy, his decision to pursue the deflowered Mary when the late Sybil was so much nicer and better looking.

But anyone who happened to watch the Season 3 finale knows the real reason Matthew has left us: his fly cast.  After a promising shot of a fly box in the episode’s opening, we knew a fishing scene was coming.  As it was to be set in Scotland, we knew it would involve spey rods.  As it was 1922 (or somewhere thereabouts), we knew they’d be cane.

We just didn’t think that Matthew would slap the rod down on the water like he was engaged in a joyless bit of sadomasochism with a switch and Lady Mary.  Does he lack a proper casting stroke because of his more modest uprbringing?

Did his ghillie refuse to give him any instruction?

Were his arms worn out after wresting the salmon (that we see later in the scene, borne by said ghillie) from the stream?

It’s unclear.  But we at Angling Trade cannot help but conclude that Matthew was written out of the script precisely because of his limp, insipid casting stroke.  (It was all foretold with Matthew’s earlier bouts of impotence.)

Chris Santella can be found at: