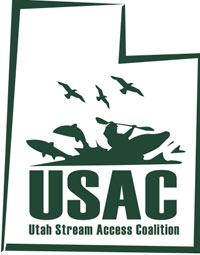 Finally, some good news on the stream access battle front.  HB 68, which would have been a serious blow to proponents of public access to Utah’s rivers and streams, was withdrawn from the state legislature.  The fight is far from over, but clearly, the voices of anglers and outdoors businesses have been heard.  From the Utah Stream Access Coalition:

“Last Friday (February 15) was a win for stream access in Utah. Over 400 people showed up at the Capitol steps to support our cause. Objective number one was accomplished: HB 68 was withdrawn from consideration by the Legislature. It was your calls, your emails and letters, and your voices that made this happen! Thank you! As part of the arrangement to pull HB68, the USAC agreed to not pursue formal introduction of its compromise legislation during this session.  USAC’s proposed legislation would replace Utah’s current stream access law, the so-called “Public Water Access Act,” with compromise language based upon Idaho statute. While we believe that our proposed legislation would resolve the stream access fight once-and-for-all, our strategic stand-down avoids a showdown between the two bills in the Legislature, and provides the courts time to review the challenges that the USAC has brought against the Public Waters Access Act. We do not anticipate any other surprises this legislative session, but the USAC will remain alert and vigilant until the session ends on March 14.”

Please take the opportunity to thank your Legislators for their involvement in this fight. Be sure and let them know that you support USAC’s proposed legislative compromise on stream access. Your voices matter, and the only way that we will be able to reach a true compromise is if all lines of communication remain open, and your elected officials know that this issue is of great importance to you.