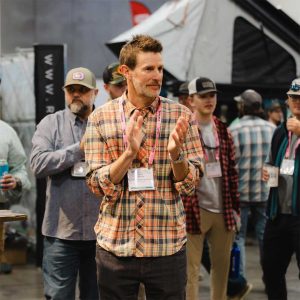 “Confluence” is great, but how about really combining that with a cause that matters?

I spent a day at the recent American Fly Fishing Trade Association confab in Charleston, South Carolina, and I have to say, it was pretty darn good.

It was well-planned… well-organized… (hats off to Kenneth Andres and Lucas Bissett) and holy jeez, could you think of a more attractive, nor relevant place to hold an industry gathering than Charleston? Save yourself the trouble, the short answer is “no.”  Charleston is an amazing city.  The fishing nearby is epic.  The culture, the community… absolutely over the top.  Charleston is (or at least it should be) one of the fly-fishing capitals of the universe, and nothing should dissuade a return visit in the future.

The program agenda was on point, and I really liked the emphasis on “sustainability.”  Kudos to Rick Crawford and Emerger Strategies for having all that dialed.  It was valuable.

So now AFFTA has announced plans to rightfully build on the structure of community, mixed with education, and all that, for a “Confluence” event, to be held in Salt Lake City at the end of September, 2023.  “Confluence” understates the traditional trade show deal, rightfully understanding that most “business” already happens outside the confines of a show floor. Instead, it’s meant to be a gathering of the family.  Cast, test gear, hang out… all good.  Sprinkled with some hard-hitting business-improvement seminars and all that… money.  Perfect.  Thank you AFFTA.

But there’s one little rub.

That same week (at the end of September 2023) Trout Unlimited plans to host its annual meeting—and also try to expand that to a larger consumer-facing gathering—under the banner of what TU is calling “CX3” which stands for “Coldwater, Community Conservation” in Spokane, Washington.

Why is TU holding this event in Spokane?

Because Spokane is the nearest major metroplex to what should be understood and accepted as one of the greatest natural resource challenges facing fly fishing today: Removal of the “lower four” dams on the Snake River drainage.

The science is clear: If those dams do not come out, 50% of the wild salmon and steelhead in the Lower 48 will cease to exist within our lifetimes.

It’s a really big deal.  And the clock is ticking.

I think this can and should be what galvanizes the fly-fishing industry today.  It should be our new “Pebble Mine” crusade.

Now… please save me from the emails and calls… I know, I KNOW, we, as an industry face many challenges to our resources.  The fight for the Everglades is not over by a longshot.  The fight against the proposed Pebble Mine is not over.  We all need to triple-down on those fights.

But if you don’t want to see half the salmon and steelhead disappear from the Continental U.S. in the next 20 years, we have to get rid of those dams.  Removing the Snake River dams is the uniting cause, and the reason for being, for anyone who truly cares about angling in America, right now.

So my questions are simply these…

AFFTA, if you’re really all about “confluence,” why don’t you bring the party to a place where we can really talk about the issues that will affect millions of anglers for generations?

And TU, bad luck, I know, but is there any wiggle room?

If there’s going to be a “confluence” it should be a real confluence, and joining of forces. There has to be a way to at least work together to cross-promote, even if you cannot physically be together.

You both could take this thing over the top.  You could all make something happens that actually matters.

I admittedly don’t know how the contracts work, who is obligated where, and for what. I know some deals are already signed. But, you should work together, industry with conservation, conservation with industry. And point toward a real confluence next year and beyond.