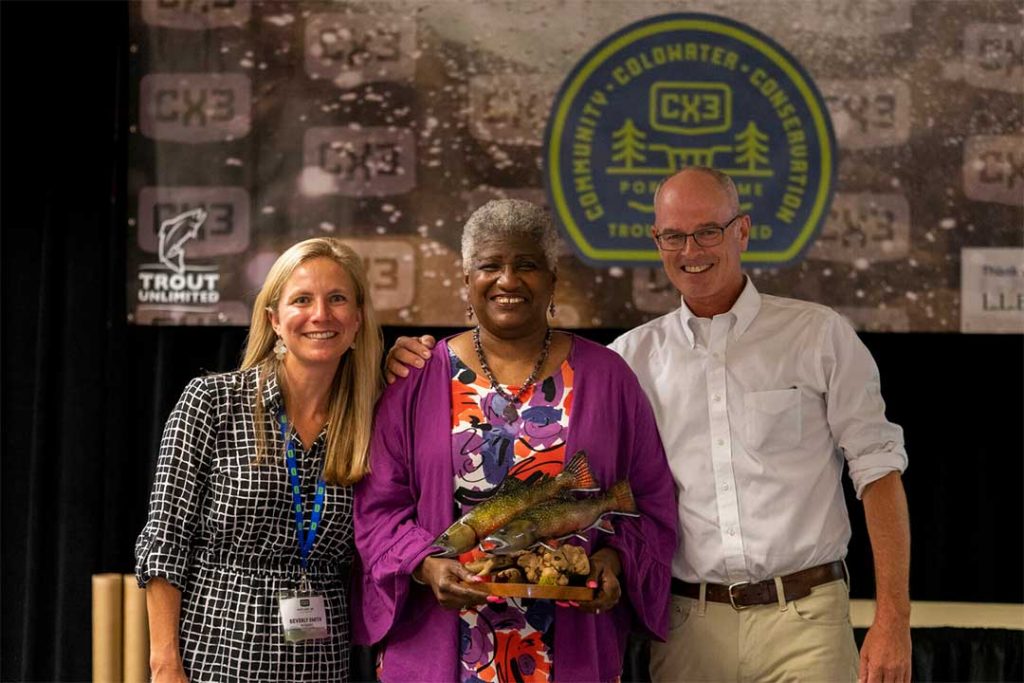 A groundbreaking stream champion from New Jersey and a longtime native trout defender from Arizona have been awarded Trout Unlimited’s highest grassroots honor.

Benevengo was drawn to fly fishing after 9/11, finding solace on the water. A resident of Manalapan, N.J., she has been a longtime volunteer for Casting for Recovery, an organization that helps breast cancer survivors experience the healing power of fly fishing. A former director of diversity for her chapter, Benevengo was elected chair of the New Jersey Council in April of 2020, becoming the first woman of color to head a TU state council.

“As the daughter of a social worker and policeman, giving back is clearly a part of her DNA,” said Trout Unlimited President and CEO Chris Wood. “Of all the volunteer leader jobs at TU, it’s by far and away the most involved. It requires the management of all the chapters in the state, state level advocacy, communications, youth and veterans’ engagement, diversity and inclusion work, and so much more.

“Marsha took over at a time of need for her council. She’s brought rigor, direction, vision and good humor to each of these activities.”

Benevengo  brings her leadership well beyond New Jersey, participating in TU’s national strategic planning process and for many years she’s contributing to the NLC’s Diversity and Inclusion workgroup.

“My role with TU and the work that I am involved in along with some amazing women conservationists and anglers defeats the foolish notion that women ‘cannot’ and people of color ‘don’t,’” she said.  “We are making strides now and for future generations.”

Walker, from Scottsdale, Ariz., has been an active TU volunteer since 1989, and has held a series of high-level national leadership positions since 2009. A member of the Board of Trustees since 2013, Walker has most recently served as the chairman of TU’s National Leadership Council since 2018.

“In 2010 Jim co-founded and has since co-chaired the Arizona Native and Wild Trout Conference,” Wood said. “He has made more than 30 visits to Washington, D.C., to meet with Congressional offices and as many to meet with representatives in his home states to advocate for trout and cold, clean water.”

Walker, who was previously recognized as a TU National Stream Champion in 2012, took the Trout in the Classroom (TIC) program in the Phoenix/ Scottsdale area from three schools to over 60, and personally oversees 47 tanks.

“As we know, though, Jim’s greatest strengths lie in ensuring that he doesn’t do anything entirely by himself,” Wood said. “He perpetuates TU in his engagement of others.

“And he may just be one of the nicest people on earth.”

Walker said he was honored to receive the award.

“Like the past recipients, I have served whenever I could be of assistance and have encouraged others to do so as well,” he said. “I am thankful for the recognition, and when I view this award, I will remember the contributions to TU made by all volunteers.”

Ray Mortensen was a founding member of TU’s Chattooga River chapter in Clemson, S.C. He held numerous leadership positions with the chapter and the South Carolina State Council, including council chair. As a member of the TU National Resource Board, he helped shape TU’s National Conservation Agenda until his death in 1998.

The meeting in Portland drew more than 300 participants, including Trout Unlimited volunteer leaders from 37 states and leaders of partner organizations.

Other award winners were:

The Mianus Chapter has always been a strong chapter, but when the pandemic hit, it seized on the opportunity rather than let the challenges defeat it and found that digital technology allowed for engagement of members and supporters on a whole new level. In just the last year, the chapter held 23 virtual events, attracting 718 participants, and 39 in-person events, attracting 553 attendees.

The 5 Rivers club at UGA has been a staple in the TU college community for several years. This club represents the key values of the 5 Rivers program: education, conservation, community, engagement, and leadership.

Council of the Year: Massachusetts

The Massachusetts Council has a long history of quietly taking stances on challenging conservation issues impacting trout and salmon habitat in the Commonwealth. Volunteers work consistently and diligently until they have reached their goal, demonstrating unparalleled perseverance.

Phil Dopson has been instrumental in the growth and success of the largest chapter in TU — the 066 – Guadalupe River Chapter in Texas, now with over 6,000 members and many more supporters.

Kim McDonald has been a fish advocate for more than a decade and is an example of how one person’s passion and activism can inspire real change. In addition to working and volunteering with Trout Unlimited, she founded “Fish Not Gold” to address the threat that motorized suction dredge mining in Washington’s rivers and streams presents to preserve salmon and their habitat.

In 2014, Linn Beck was a driving force behind the establishment of the Wisconsin TU Youth Fishing Camp, committing to building an inclusive camp experience. In the opinions of both the campers and the camp staff, the Wisconsin camp has offered a very welcoming atmosphere from day one of its operation.

Paul Christman’s work over many decades has been based in science, carefully managed, practical and creative. As a Marine Scientist with the Maine Department of Marine Resources he has been instrumental in re-establishing endangered sea run Atlantic salmon in the Kennebec River watershed, fulfilling the promise of the Edwards Dam removal and significantly increasing the likelihood that Atlantic salmon will avoid extinction.

Dr. Holly Bamford is responsible for advancing the National Fish and Wildlife Foundation’s mission through the creation and implementation of a comprehensive conservation vision, strategy and a metrics-based evaluation system for NFWF’s grant-making programs. She serves an important role in creating and leading NFWF’s conservation strategy by setting national and regional cross-cutting strategies, and by leading design, development and fundraising planning for the conservation strategy, as well as guiding the conservation policies and practices of the Foundation.

For decades, L.L.Bean has offered unwavering support to TU’s efforts, primarily through sponsorship of youth programs and camps and the contribution of product for TU chapters to use engaging local communities. Each year, L.L.Bean distributes to TU chapters approximately $30,000 in rods, reels and/or packs. Because of the company’s generosity, tens of thousands of L.L.Bean rods have been used by TU chapter leaders to teach the next generation to fish, to help veterans and first responders find healing through time on the water, or at community casting clinics.

Trout Unlimited is the nation’s oldest and largest coldwater fisheries conservation organization dedicated to caring for and recovering America’s rivers and streams so our children can experience the joy of wild and native trout and salmon. Across the country, TU brings to bear local, regional and national grassroots organizing, durable partnerships, science-backed policy muscle, and legal firepower on behalf of trout and salmon fisheries, healthy waters and vibrant communities. For more information on our work, visit www.tu.org.