Those who’ve longed to ply the fecund flats of the Indian Ocean now have an alternative to the Seychelles:  Fly Fishing Maldives began hosting anglers this fall. 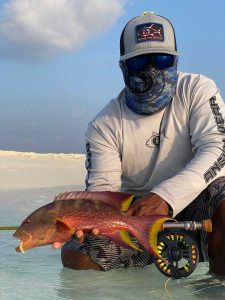 The outfit is the brainchild of Rok Lustrik, who over the past 20 years has helped put Slovenia on the traveling fly angler’s map.  “I’d long dreamed of setting up a flyfishing operation in the Maldives,” Lustrik said.  “I’ve had many amazing fishing experiences there myself, and wanted to share it with others.  I never had the time to do it with my guiding schedule at home.  But with COVID-19, I was able to get the operation going.”

The Republic of the Maldives consist of 26 coral atolls and 1,200 islets, roughly 400 miles southwest of the southern tip of India.  The landmass stretches some 500 miles from Tiladummati Atoll in the north to Addu Atoll in the south, and encompass some 56,000 square miles of the Indian Ocean.  Thanks to their isolated location and the strong currents that whip through, the Maldives are one of the globe’s biomass capitals.  This has made it a destination for scuba divers, and may do the same for anglers.

Fly Fishing Maldives is anchored by two local fly-fishing guides, Addu and Aful.  “They’ve both been fishing the region for decades, and have in-depth knowledge of the island nation’s myriad flats and how they are impacted by tides,” Rok added.  “There’s so much habitat, and very little fly-fishing pressure.”

Tremendous variety is the name of the game in the Maldives.  On the flats, anglers will find bluefin trevally, GTs, triggerfish, bonefish, and Indo-Pacific permit.  Pelagic species – including yellowfin and dogtooth tuna, wahoo, Indo-Pacific sailfish and milkfish – are also in easy reach.  Guests stay in family-owned hotels; the menu includes a good deal of seafood, but also chicken, beef and lots of curry.

Fly Fishing Maldives can accommodate up to four anglers a week; all-inclusive packages (except for airfare) run around $2,700 per person, based on 4-person occupancy.  (Guests fly into the capital city of Male.)  It should be noted that the average elevation of this nation of atolls and islands is just north of 3 feet above sea level, making it the world’s flattest republic.  In other words—visit soon.