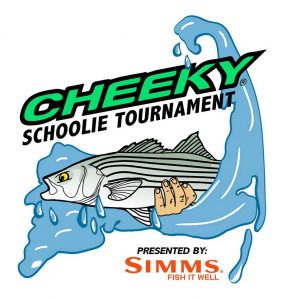 The 9th Cheeky Schoolie Tournament concluded on Saturday with smiling, wind-blown faces and a huge check for striped bass conservation. More than 462 anglers decided to keep the dream alive when Cheeky postponed the event from its normal May date to September in the wake of the COVID-19 outbreak.

“We were blown away that more than 87% of the participants stuck with the event after the postponement,” said Ted Upton, CEO of Cheeky Fishing. “This year was all about delivering a safe event with a focus on the fish and the community.”

This year’s all-virtual event was capped by a live stream on the Cheeky Facebook and YouTube pages where more than $25,000 worth of gear from presenting sponsor Simms Fishing Products as well as other key sponsors including Costa, Yeti, Thomas & Thomas Flyrods, and Oscar Blues, was given away. The biggest prize went to conservation when Upton signed an oversized check for $15,610 to the tournament’s conservation partners: Stripers Forever, Keep Fish Wet, and the American Saltwater Guides Association.

“It is, by far, my favorite part of the event,” Upton said to the thousands of people who tuned in for the Schoolie Tournament Live Stream.

Typically held on Cape Cod in May, the Cheeky Schoolie Tournament is the largest fly fishing catch-and-release tournament in the world. Teams of two anglers measure their longest four striped bass for their score. Anglers can go anywhere on Cape Cod, but must be on foot: It is wade fishing only … no boats, paddleboards, or swimming permitted.