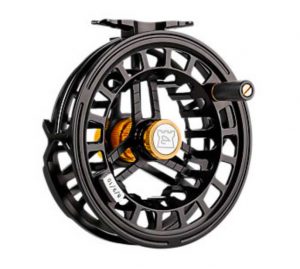 The name Hardy alone is enough to make me form an attachment to a fly-fishing reel.  I’m a sucker for the classics.  But I have to tell you, Hardy has also pushed some engineering and design buttons with the advent of its new Ultradisc reel; it’s one of the most unique models I’ve seen in the past several years, and I think it will attract a following.

Unique selling propositions:  It’s super light.  Minimalist aluminum on both frame and spool—if there was any hunk of metal on the reel that wasn’t absolutely necessary, Hardy cut it out.  Literally.  The result is a funky lattice of metal with an arty aesthetic, but a perceptible lightness you feel immediately.  With this reel, you cannot help but be more in tune with the action of the fly rod it’s mounted on.  This is the lightest disc-drag reel Hardy has ever made.

The drag itself is plenty capable for a trout reel, but even though it’s a disc, it makes a clicking sound.  I like that buzz when a fish is pulling out line.

I like the audible, feel of the drag adjustment knob.  Not clunky, yet not too subtle.

Perhaps most importantly—you know that annoying feeling when you go to string up your rod, and the tippet/leader you have on the reel is somehow stuck between the frame and the spool?  So you have to dig it free, or cut it off, and it’s a total pain in the butt that wastes money and tippet/leader.  I hate that!  Well, this reel is designed in a way that that cannot happen. And your thin running line, or even your backing, won’t get jimmied between the frame and spool either.

If I had to ding the Ultradisc reel, I would simply say that I fear dinging it.  Like dropping it.  So I’ll try not to do that.  And I suppose if you’re used to fishing with a heavy reel, when you screw this one onto your favorite rod, it’s going to change the way the casting stroke feels.  I think for the better, in a more responsive and in-tune way, but that’s just me.

Priced between $325 and $400 depending on size, it’s also not an unreasonable ask.  I think for something fresh… light… new… eye-catching… with a few cool performance wrinkles mixed in, the Ultradisc is a winner, and certainly worthy to carry the rich Hardy tradition.  See hardyfishing.com.