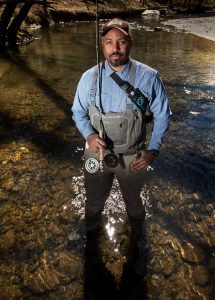 Imagine if you will that you’re on the oars and you’ve just pushed off. The morning is bright, the possibilities of putting your guy on sizable fish on dries are high — you heard the client is a good stick. But he’s just made a racist joke to break the ice. You might ignore it. You might chuckle along quietly. You might say something. Now imagine if you were an African American guide, and while comments like this don’t happen every day, they happen often. Sadly, this is a reality for a friend of mine.

You might think, wow, that guy knew his guide was Black and didn’t even care. Why on Earth would he say that?! Well, let’s talk about it.

Racism is often taught as a disadvantage to people of color, but it is rarely taught as an advantage to white people, and so systemic racism which confers an unearned advantage on white people can be a very touchy subject. White privilege is often an exemption from racial discrimination. Systems of racism work on behalf of and benefit white people whether they want it or not. Yet, just about no one wants to feel like they didn’t earn it (whatever “it” is).

In the outdoors, white privilege allows white people to go to the woods for transcendence, to unburden themselves, to escape, without ever having to consider race playing a role. In fishing, it means, white people can just go fishing.

What’s worse, white privilege, whether you believe in it or not, confers the opportunity to completely ignore and never even consider the experiences of people of color who fish.

But for Black, Indigenous, and people of color including people of color who can’t pass as white (BIPOC), going into the outdoors can be a very different experience precisely because of skin color or ethnicity.

Do we still, as people of color (I’m African American), go to the river to heal and unburden ourselves? Though it’s not the top reason we go fishing according to a recent study[1], yes, of course we do. We seek a feeling of accomplishment and to make memories. Still, there are other things that go with us that we cannot escape.

1. We do not feel as safe as white people in the outdoors.

In recent months I’ve had two accomplished anglers of color discuss with me their concerns about traveling to fish. The historical trauma of slavery, lynchings, and Jim Crow is associated with the outdoors for many African Americans as found in a recent study. The murder of George Floyd by the police and other recent murders exacerbate a chilling effect. We don’t have the privilege of knowing that our race won’t work against us if we are fishing alone or in small groups in the outdoors when we encounter white people. If race can work against us on the street, why wouldn’t it in the outdoors too where we might come across white rangers, police, and environmental officers? So sometimes instead of “opting outside” we opt in.

2. We don’t have access to the same health benefits of the outdoors.

The well-documented health benefits[2] of the outdoors are not as available to BIPOC as they are to white people. While whites make up 63% of the American population, they are up to 95% of all visitors to our nation’s national parks and public lands. Just over 20% of whites live in nature-deprived areas compared to 74% of non-whites[3]. Every other group in America is grossly underrepresented as public lands visitors. Native American lands were stolen, renamed and popularized as destinations for white leisure travel or privatized for energy extraction. Affordability and access are issues, but a history of discrimination is a huge factor.

3. We are not represented in fishing so we’re ignored as anglers.

People of color hunt and fish but the story of the outdoors and fishing is mostly white. Over 9 million people of color fished in the US last year out of the 50 million or so who went fishing. Yet with few exceptions BIPOC are rarely featured in your favorite fishing magazine. The outdoor industry is predominantly white, yet people of color, particularly African Americans and Hispanics take more trips outside than whites[4]. Being on the water with a white person who is unaware of this can be challenging because the erasure and white privilege can lead to policing (you’re not doing it right), stereotyping, and uncomfortable encounters that include staring, verbal harassment and insults. I’ve experienced condescension and questioning and so have my friends of color who fish from white anglers who don’t expect us to know what we’re doing, fish legally, or how to practice leave no trace.

4. We are not considered part of the conservation solution.

The CEO of Trout Unlimited recently revealed that over 97% of the members of the nation’s largest coldwater conservation organization protecting trout and salmonids in the US are white[5]. It was a warning, but why shouldn’t it be different? The executive leadership is mostly white, and it’s a similar story at other top water conservation organizations. Conservation and fishing go hand-in-hand, and yet, outreach to anglers of color and indigenous people is the exception, not the norm.

Again, the erasure of BIPOC as anglers means we are ignored when it comes time to protect the outdoors, despite a long-standing history of participation in environmental activism. We are left out of the conservation debate while solutions are being made on Capitol Hill that impact the future of fishing for everyone.

How systemic racism is embedded in fishing

I recently wrote that systemic racism is embedded in several areas of fishing, like catch and release, licenses and fees, trophy fishing and blue-ribbon waters. It’s actually in a number of areas, but commenters on the article demanded that I provide examples so “they could learn something” instead of doing their own work (white privilege).

But no worries, I love sharing. So how can commonplace practices in fishing be impacted by systemic racism?

To start, BIPOC people have to pay more for things than white people at the cost of what they won’t be able to buy later. A dollar spent on fishing is more than a dollar because systemic racism has led to a well-documented racial wealth gap, and therefore we have less disposable income to spend on fishing[7]. Interestingly, we spend more per hour outside than whites on gear according to a 2014 OIA study. Yes, we are valuable consumers.

We should as an industry be thinking harder and innovating on how we market fishing, fishing licenses, fishing gear and tackle, even the costs of guided and destination fishing, to make it more accessible for everyone. Perhaps fishing license fees should also support research and outreach to anglers of color (and no, not all license fees go to conservation).

With some exceptions like the Chattahoochee River in Atlanta, BIPOC people don’t live close to blue ribbon waters (I’m not saying blue ribbon waters aren’t worth the drive) and the majority of people of color in the US live in urban areas. A lack of high quality urban fisheries is partly the result of systemic racism working against advocacy and funds to clean and protect America’s waterways top to bottom. That further erodes interest in fishing, separates BIPOC anglers, and limits access to nature’s health benefits.

Far more subtle, trophy fishing and catch and release are exalted among anglers and this tends to ignore another big difference in the way people of color fish that can lead to stereotyping and shaming. I’m talking about subsistence fishing. We gladly bonk invasive Mackinaws in Yellowstone Lake (well some of us), but we don’t talk much about catch and eat. Many anglers of color who have to stretch their dollar are putting legally-caught meat on the table and having fun while they do it. While unintended, systemic racism contributes to the stereotype that subsistence anglers, which historically includes people of color, don’t care about the environment or are making their fisheries less sustainable. I’ve encountered outfitters guiding on water where it’s legal to catch and eat proudly advertise they are catch and release only, which can feel coded to people of color as “this fishing style isn’t for me.” This barrier to entry is an example where you don’t need racists for systemic racism to work.

As an industry we should be thinking of BIPOC when we devise and promote conservation tools like catch and release, asking how it might impact minority communities and fishing overall. Whole ecology conservation rules are a start because it includes subsistence fishing, and catch and release, blue ribbon waters are important and should not be abolished but neither should these standards be tools of exclusion.

Now, about that internalized fear, well it’s not the job of white people to dispel our fear and anxiety about going fishing. People of color do not expect 400+ years of historical trauma and discrimination to be wiped out by a smile, wave or hello on the water (though it always helps to be kind). However, the industry can make fishing feel more welcome for everyone in a variety of ways. We work to be more inclusive by recruiting, training, and hiring more people of color into the industry and conservation. Before you say you can’t find us, look twice. The Greening Youth Foundation has been training a diverse workforce for years and would love to hear from you if you seek BIPOC interns. Trout Unlimited recently announced plans to partner and recruit at historically black colleges and universities and already works with aspiring indigenous guides in Alaska.

We need to demand that the industry and conservation boards of the bodies use our dues to represent all of us. We can support and partner with more diverse organizations locally and nationally. At a minimum, we need to promote and include more people of color in fishing advertising and media. We need to recognize past and new anglers of color in fishing and make their stories better known. We can do things like support and sign the Brown Folks Fishing Angling for All Pledge or join the Let’s Go Fishing/Vamos a Pescar campaign by RBBF and commit to a more inclusive sport.

One more thing. Do we want fishing to just be a white sport? Or do we want everyone to enjoy it?

If white privilege continues to make it possible to ignore my lived experience and the research, let’s take one final look at how systemic racism works in fishing. According to data from Recreational Boating and Fishing Foundation and the Outdoor Foundation, nearly 20% of all white Americans fished last year, only 7% of Hispanics did so, and only 8.8% of Blacks, and only 9% of Asians. Whites were two times as likely to fish last year than everyone else[8].

The OIA reports that in the last two years, freshwater and saltwater fishing by Hispanics is up 2%, but has not rebounded to the five-year high. Fly fishing is down among African Americans 1.5 points from 10.5% to 9% since 2015. Fly fishing is up from 4.6% to 5% among Asians, and up for Hispanics from 11.3% to 12%, but overall that’s still flat.

Unless we begin to recognize that systemic racism has had an impact on fishing in America this sport will continue to become more white and less representative of the nation. We will be unintentionally leaving out millions of allies in water conservation too. People of color in America will not get to experience what we already know – that fishing is an absolutely awesome pursuit, that’s good for the health of individuals and families, good for business, good for the environment, and good for the soul.

Take Me Fishing: How to Attract Hispanic and Multicultural Audiences

Five Ways to Make the Outdoors More Inclusive: An Action Plan for Change

[3] The Nature Gap, Confronting Racial and Economic Disparities in the Destruction and Protection of Nature in America, Center for American Progress, 2020.