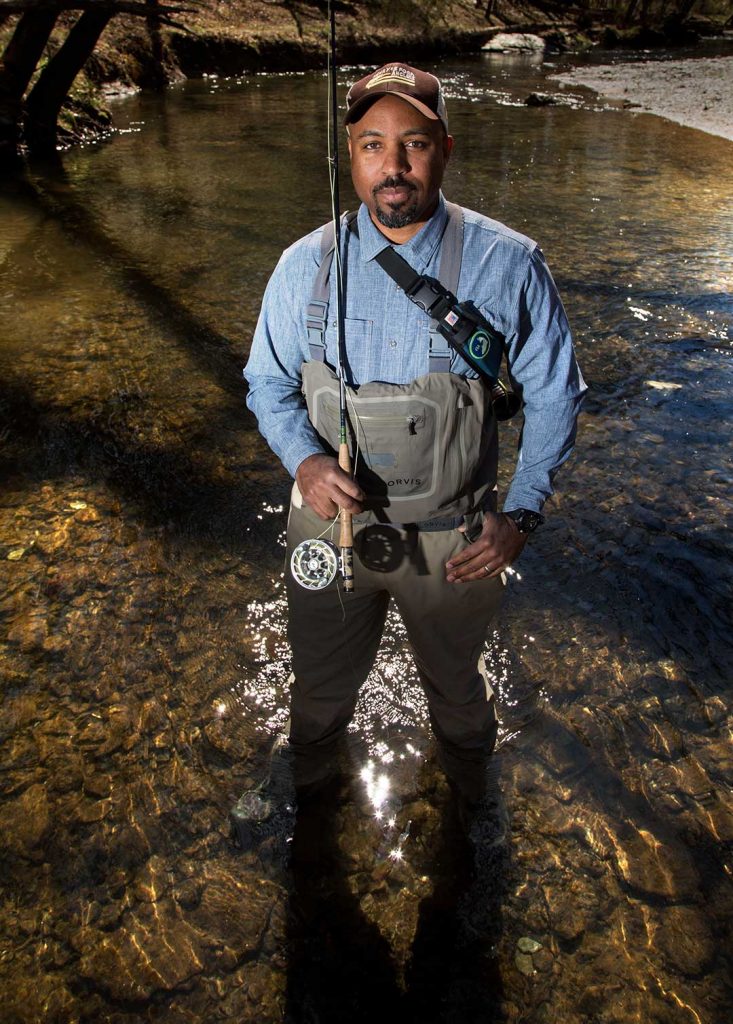 Besides the passage of the Great American Outdoors Act and COVID-19 cancellations, the biggest news in fishing this summer might be that in July The Orvis Company signed onto a pledge launched by Brown Folks Fishing, a grassroots organization committed to building community and expanding access among Black, Indigenous, and People of Color (BIPOC) in fishing and its industry. The Angling for All Pledge (created in the spirit and solidarity with the Outdoor CEO pledge devised by Teresa Baker) establishes a commitment to equity and inclusion in the angling community. The Orvis Company is the inaugural pledgee.

Popular fishing blog Flylords and many other fishing outlets carried the news. I was invited to comment on the news on Flylords’ Facebook page by an ally. Perusing the comments, I saw cancel culture at its worst with many folks saying goodbye to Flylords for even posting the news. Reactions ranged from, “I go fishing to get away from this” to “I hope this is a joke, I’ve never seen racism in fly fishing.”

There were the usual “I’m not racist” comments–which, in short, really means, “I believe in white privilege and so I’d rather not talk about racism or take the moment to acknowledge my fellow anglers experiencing racism.” Basically, “it’s all about me, my fishing, and my blissful ignorance.”

Some reactions on the Flylords thread did applaud Orvis’ move: “I’m so sick of this blah blah blah/stick to fishing/I go fishing to ignore racism. It’s called systematic racism look it up. Thank you Flylords for posting this.”

While the negative and cancel comments can be tiresome, it occurred to me that most commentators probably hadn’t read the article, and there are many anglers who hold the same sentiment off the water, and who certainly don’t actually know what systemic racism is or how it works, how it could possibly exist in fishing, and why The Orvis Company would want to work with Brown Folks Fishing on the issue.

So, systemic racism… what is it? First, it exists in every institution, including professional sports and casual outdoor activities like fishing, regardless of how integrated or diverse the sport is. Why? It’s how systemic racism works… systemic racism is an embedded system of discrimination where racist effects like exclusion and denigration based on skin color or ethnicity takes place even when there are no racists present. It works whether you’re looking or not.

Let’s look at swimming. A majority of African Americans don’t know how to swim compared to Whites (60% compared to 40%) and yet a black child between age 5 and 19 is nearly 6 times more likely to drown than a white child according to CDC data. That’s systemic racism at work. It is the curse of Jim Crow segregation of swimming pools still having an impact 40 years later.

Like Project Healing Waters or Casting for Recovery, Brown Folks Fishing is an affinity group with a purpose. It’s pretty ignorant to suggest folks with cancer or PTSD can’t come together to fish, commune and heal, and it’s ignorant and racist to say people of color shouldn’t do the same.

Overt individual acts of racist aggression take place off the water; why should it be different on the water? Here’s what happened to a friend last year while fly fishing solo in Colorado.

Imagine standing in the river minding your own business…you just tied on a green drake, because they’re popping…the excitement is palpable and your hands are shaking. Then a car rolls by you. You hear the words, “Nigger! Go home!”

Imagine the terror that hits you, sending a chill down your spine. You recover and think, EFF that guy, but… am I safe here? People who yell such racist insults are the same willing to escalate from words to gunshots.

B.S. you say, that’s just some random jerk and you should ignore it. Aggression happens.

Okay, now let me share with you something: I’ve been shot at on the river (not on the Pan thank God because I could never fathom not returning to that magical river and my friend was not accosted on the Pan, he has not shared the location).

I was fishing solo, but not alone, as the stretch of this river was popular with fly anglers. The day was bright, warm, and hazy. The water was low and clear. The wild browns were rising in front of me. I stopped wading to switch to a smaller sulphur fly for the slurping brown. There was a high trail on river-left and I could also hear people padding by occasionally.

The first bullet was just a whirring zip and splash. I thought it was an insect. I didn’t even hear the shot, so intent on the little brown as I was. The second was an unmistakable crack and splash in the water next to me.

I heard the laughter in the trees. The running footsteps. I heard the guys take a last potshot at a sign. I stared. I just stared. Was this really happening?

In the days and months afterward I struggled to downplay it. As one of the comments on Flylords put it, who wants to be “making something out of nothing?” At the time, I told myself it was a BB gun and kids playing around. I told myself they didn’t intend me any real harm. But I’ve come to accept it was intentional (there were other anglers, I was the only Black angler on the river), and that I could have been seriously hurt or worse.

I don’t expect the white anglers learning about Brown Folks Fishing and the courageous act of The Orvis Company becoming the first co-signer to this Pledge to agree with anything I’ve just shared, because that’s precisely the point of systemic racism. It continues to work when no one thinks it does (kinda like the Devil). And when it’s not systemic, it’s just plain old everyday violence. You may not believe in the Devil, but racism believes in you.

I know that anglers are a pretty special sort of people. We have the amazing talent to “pattern” fish and read the water. If we pattern this situation and the voices being raised about this issue, we should be able to say, hey, something is happening and maybe I ought to add some weight or change my fly. Maybe I ought to go deeper. I ought to hear these voices, like I read the river, consider what they’re saying, and be willing to adapt.

So what will The Orvis Company do and how will it make a difference? They’ll train in an equity and inclusion curriculum and get wiser about how to bring it into their business thinking. As leaders in fishing, it’ll set a path for greater representation and equality in our sport.

To learn more about the issue of equity and inclusion in outdoor recreation, and how to be an ally of groups like Brown Folks Fishing and other related organizations, here are some resources.

The Adventure Gap, Changing the Face of the Outdoors by James Edward Mills