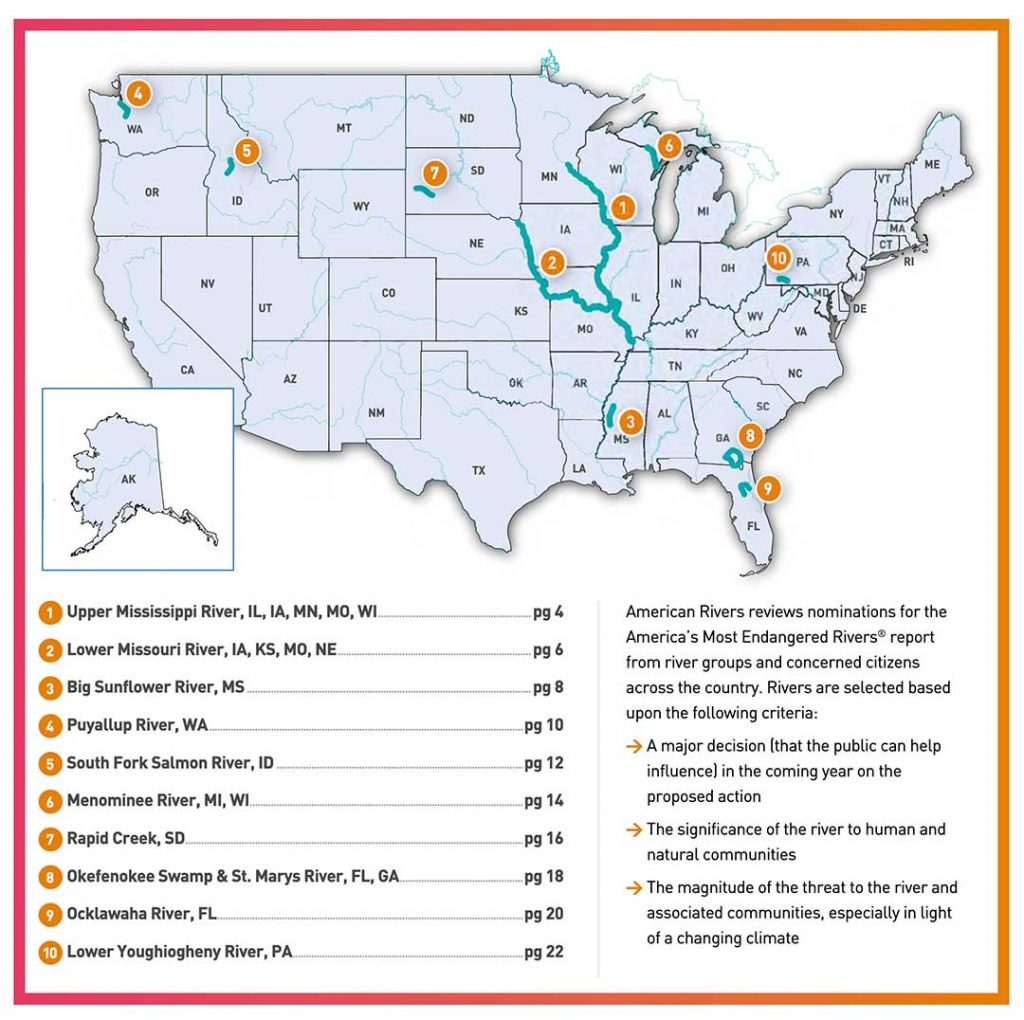 American Rivers today released its annual list of America’s Most Endangered Rivers®, spotlighting ten rivers that are vital to the nation and face imminent threats.

Increasingly severe flooding fueled by climate change threatens the upper Mississippi and lower Missouri, the top two rivers on the 2020 list, underscoring the need for action by local, state and federal decision makers.

“America’s Most Endangered Rivers is a call to action to save the rivers our nation depends on for clean drinking water, a strong economy, and connection with each other and the natural world,” said Bob Irvin, President and CEO of American Rivers.

Flooding is threatening upper Mississippi and lower Missouri communities right now.  The National Oceanic and Atmospheric Administration predicts widespread flooding through the end of May, with major or moderate floods in 23 states. Flooding during the coronavirus outbreak would create unprecedented risks for public health and safety.

“Mixing poor river management with climate change has created a recipe for disaster,” Irvin said. “Lives, businesses and property are at risk. It’s time for our leaders to prioritize solutions that protect rivers and strengthen communities. Our health and safety depend on it.”

The Midwest continues to rely on dangerously outdated and insufficient river management as flooding increases with climate change. The 2019 Midwest flood left homes, farms, roads and businesses under water for nearly 100 days on the upper Mississippi River and close to a full year on parts of the Missouri River.  According to NOAA, the 2019 flooding caused four deaths and $6.2 billion in damage. Yet river management decisions across the region are making the problem worse, allowing higher levees and risky floodplain development, and failing to adequately plan for the future.

On the #1 Most Endangered River, the upper Mississippi, American Rivers called on state and federal leaders in Iowa, Illinois, Missouri, Minnesota and Wisconsin to fund the “Keys to the River” plan. Officially named the Keys to the River 2020: An Upper Mississippi River Flood Risk, Sediment and Drought Management Study and led by the Army Corps of Engineers, it is the most ambitious attempt by any federal or state entity to respond to the economic and public safety threats to the upper Mississippi posed by climate change. If fully funded, it would be transformational in how the United States manages rivers and floodplains.

On the #2 lower Missouri River, American Rivers called on the governors of Missouri, Iowa, Nebraska, Kansas to initiate flood protection solutions that give the river room, and urged the U.S. Army Corps of Engineers to prioritize projects that deliver multiple benefits, including flood risk reduction and habitat restoration.

“Rivers are ground zero for the worst impacts of climate change, including devastating floods. But rivers can also be a source of strength and resilience when we prioritize innovative solutions,” Irvin said.

Communities on the Mississippi and Missouri rivers can look to California’s Central Valley for inspiration, where nature-based approaches are delivering multiple benefits, including flood safety, improved water quality, habitat and parks. Examples of these innovative solutions include setting levees back from the river to allow floodwaters to safely spread out, and breaching levees in strategic areas to reconnect the river with its floodplain.

Scientists estimate that extreme downpours in the U.S. could increase by 400 percent by the end of this century. One study found that the magnitude of 100-year floods in the Mississippi Basin has increased by 20 percent over the past 500 years, with much of that increase being caused by the combination of river development and climate change. A November 2019 study, Climate Change and the American Mind, found that a majority of Americans are worried about harm from extreme events in their local area, with 58 percent concerned about harm from flooding. The harshest impacts of climate change are often most prevalent in communities of color and economically disadvantaged communities. In the Midwest, wealthier towns are building higher levees, pushing floodwaters into poorer communities, perpetuating longstanding injustices.

In addition to announcing America’s Most Endangered Rivers today, American Rivers named the Delaware River as “River of the Year.” The honor spotlights the river as an extraordinary example of restoration and a model for equitable and innovative clean water solutions.

“The Delaware River is a national success story,” said Irvin. “The River of the Year honor recognizes the hard work of many local advocates who understand that a healthy Delaware River is vital to the health of millions of people.”

“The Delaware shows how a healthy river can be an engine for thriving communities and strong local economies.”

In its 35th year, the annual America’s Most Endangered Rivers® report is a list of rivers at a crossroads, where key decisions in the coming months will determine the rivers’ fates. Rivers are chosen for the list based on the following criteria: 1) The magnitude of the threat, 2) The significance of the river to people and nature and 3) A critical decision-point in the coming year. Over the years, the report has helped spur many successes including the removal of outdated dams and the prevention of harmful development and pollution.

AMERICA’S MOST ENDANGERED RIVERS® OF 2020

Honored as a national success story for restoration and a model for equitable and innovative clean water solutions.

American Rivers believes every community in our country should have clean water and a healthy river. Since 1973, we have been protecting wild rivers, restoring damaged rivers and conserving clean water for people and nature. With headquarters in Washington, D.C., and offices across the country, we are the most effective river conservation organization in the United States, delivering solutions that will last for generations to come. Find your connections at AmericanRivers.org.