This next set of items are things we’ve only just started playing with… Items that were sent to us in the dead of winter. Now that the ice is starting to thaw and snow starting to melt will see some more time out on the road, river and in our boats. These are our first impressions, and we will follow up with more detailed info on them as the fishing season progresses. -TR 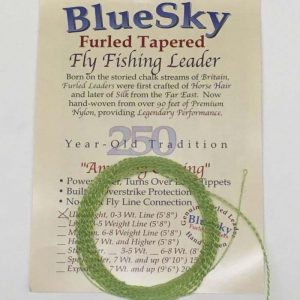 Blue Sky Furled Leaders. I’ll be honest; I’ve never really understood why anyone would want a furled leader. I used to think it was simply a nostalgic look back at a technology that had been surpassed many years ago. Basically, leaders for folks in the tweed and pipe crowd to throw at trout eating dry flies. Well, I was wrong. The past few months have allowed me some travel and I’ve used these leaders for big bass in Mexico, and triggerfish on the flats of Christmas Island. Even a little streamer action here in Colorado. See the pattern here? No dry flies. You know what? These things are fantastic to throw the bigger stuff on. They roll out perfectly and are very easy to throw. The energy transfer is surprisingly effective, and the built-in shock protection is pretty handy for larger fish also. They also have the added benefit of loops at both ends for less waste of tippet and leader material over time for that matter. Simply snip a piece of tippet, throw a loop on and boom… you’re ready to go. I’ve found my waste of leader material has gone down when using furled leaders to be an added bonus. Less plastic is something all of us should be able to get behind. Blue Sky has leaders come in many sizes. MSRP $11.95 – $14.95 www.blueskyfly.com

Dometic CFX 35W Electric Cooler. Electric Cooler you say? Why? You ask. I’ll tell you. It’s got 60% more storage capacity than a standard cooler of the same size! That’s roughly 47 cans of beer. It can deep freeze to -7, uses very little power and can use AC/DC or solar power to keep things chilly. It also is controllable from an app on your phone, should you want to dial it up or down from the front of the truck as it chills your beers in the back. Oh, and did I mention it has lights inside? Something tells me your other cooler doesn’t light up. It runs very quietly and while we’ve yet to put it through the paces in 95-degree heat, I can already tell you I’m mighty impressed. Over Christmas we were hosting a party and we and ran out of refrigerator space. I simply plugged in the Dometic CFX 35 and squeezed in multiple six packs, an entire turkey, a gallon of milk, and still had room to spare. It was weird how much stuff you could fit in this thing. More to come throughout the summer, but so far I’m loving it. MSRP $899.99 www.dometic.com 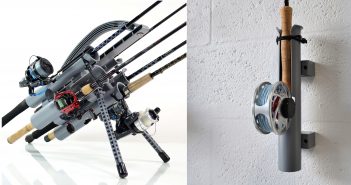 Rod Runner Mounts. Again, this is just something I’ve started using in the garage, bass pond and local creek, but I’m digging it so far. When I first got the box of stuff from Rod-Runner I was like, ugh… yeah. What is this stuff? The thing is, as weird as the multi-rod carrier looks, it functions damn well. I’ve been loading up two or three bass spinning rods, a fly rod for carp and one for bass for quick jaunts to the local pond. Instead of a pile of rods in one hand and lines getting caught every time I move to a new spot I simply pick up the Rod Runner Pro 5 and everything is right there. The carrier protects my rods in the back of my truck and if you’re a salty angler it makes rinses a very easy affair. The holders are all customizable for different styles of rods or reels and switching them is stupid easy. Rod runner is also making mall mounts from basically the same exact tubing. It’s easy to install, can be used vertically or horizontally; so far for me it is very effective. This company makes a pile of stuff that is certain to simplify your rod storage needs. Prices vary depending on product. www.Rod-runner.com 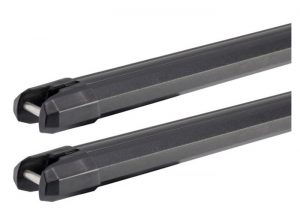 Yakima HD Crossbars and Slim Shady Awning. The old round rusty crossbars that used to be on my roof rack were with me for a long time. So long they had opened up and rusted out enough at the ends that I had to literally cut them off. I had no idea there was actual technology in roof rack crossbars, but after using the Yakima HD Crossbars for the last couple months I gotta say, bravo! Why so nice? First, they’re beefy and much larger than my old round bars, but lighter. They are constructed with aluminum (non-rusting), but powder coated for durability. They have integrated and recessed tie-downs at the ends. This feature rocks! Super handy for securing loads, drying wet clothes (think clothesline), or hanging lanterns at night. They also have what Yakima calls “T-slots” for easy Yaikma accessory attaching. I just plopped a hardshell Roofnest Rooftop tent on mine and they’ve been bomber so far. I’ve also just attached their “Slim Shady” Awning on said bars and while the use so far has been low, I’m excited to pull out the 42 square feet of sun and rain protection this summer when I need it. More on that later. Set of HD bars $249.99, Slim Shady Awning $299.00  www.yakima.com 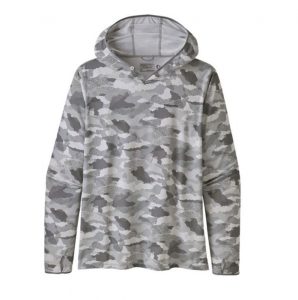 Patagonia Men’s Tropic Comfort Hoody II & Men’s Capilene Cool Daily Hoody. When I’m out fishing I like to cover up from the sun and lightweight hoodies are my preferred method to do this. I’ll wear sunblock or a Buff, but prefer an very lightweight shirt with an oversized hood and ballcap. Sometimes that plus a Buff. I recently took the Patagonia Men’s Tropic Comfort Hoody II and Men’s Capilene Cool Daily Hoody with me to Christmas Island for a week and basically lived in them. The first is a true fishing hoody is absurdly soft and comfortable. It’s got an oversized hood for hat usage and a brilliant single button that blocks your neck when closed and gives you more air when needed, plus thumb holes for rowing all day or casting on the flats when you need a touch more protection on the tops of your hands. It’s 50% recycled polyester jersey and UPF 50. The second shirt is perhaps the most comfortable sun hoody I’ve ever worn with miDori bioSoft for added wicking and softness, odor control and 50+ UPF protection. It’s cut a bit slimmer and has no thumb holes. Patagonia Men’s Tropic Comfort Hoody II MSRP $59 & Men’s Capilene Cool Daily Hoody MSRP $55 www.patagonia.com

Editor’s note: Look for more extensive, consumer-facing fly-fishing product reviews on anglingtrade.com and on social media from AT, particularly as we work through the summer and toward the IFTD show in Denver. We’ll also be featuring another season of “Jack-in-the-Bob” reviews by Jack Nickens from the Bob Marshall Wilderness this summer. If you want products reviewed, contact [email protected]