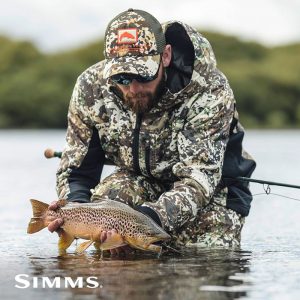 Simms Fishing Products, in partnership with expert camo developers at Veil Camo, has created a camo that fish apparently can’t see.  Established in 2012, Veil Camo operates under a simple mission objective: To make meaningfully better camo for outdoor enthusiasts. By using a scientific, research driven approach, Veil strives to implement technological advances in the way camouflage is designed and functions.

To inform the River Camo design process, Veil dug into research and data surrounding various species of fish as well as their ability to see and interpret the spectrum of color, contrast, shape recognition, movement, and the effect that water and weather conditions have on all of these variables.  Simms River Camo pattern uses Mother Nature’s own mathematical signature in every step, layer, nook and cranny of the design process. Using theories like fractal math, chaos math, and The Golden Mean, Simms River Camo succeeds in the original goal – to distort the fish’s ability to detect shape and movement. 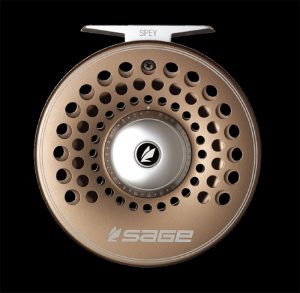 Another of our favorite new products from the IFTD show in Orlando is the new Spey Reel from Sage.  Retailing for $475-$500, the reel is machined aluminum, with a noticeably smooth-starting drag system.  Most relevant, it has limited porting on its sides, which makes the reel weigh exactly the right amount to appropriately balance a Spey rod.  Smart design, good performance, solid price, a pretty easy reel to recommend to the two-hander. 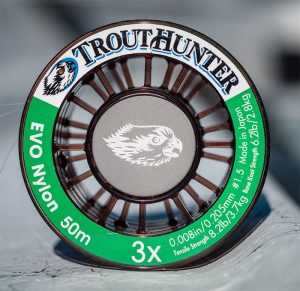 TroutHunter released a new EVO Nylon Tippet. With the EVO tippet, TroutHunter makes improvements over their existing nylon through the proper application of a new proprietary organic coating. The result is much stronger knot strength achieved with no noticeable increase in diameter. Overall, the knot strength is either comparable or superior to many of the same sizes of fluorocarbon.

Additional benefits to TroutHunter’s new coating can be found on the water. The coating adds a measure of durability in combating abrasion while also repelling water, so the nylon will float better than previous nylons. In addition, once the package is open, the coating will protect the material from water and humidity that will enter the spools from normal use, thereby adding to the useful life of the purchase.