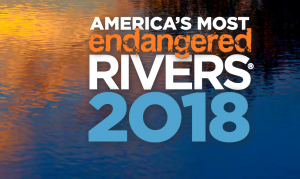 From draining critical wetlands on Mississippi’s Big Sunflower River to mining in Minnesota’s Boundary Waters and the rivers of Alaska’s Bristol Bay, to building a border wall on the Lower Rio Grande, America’s Most Endangered Rivers of 2018 illustrates the impacts that this administration and Congress could have on clean water and people for decades to come.

“In our many years of issuing the America’s Most Endangered Rivers report, we’ve seldom seen a collection of threats this severe, or an administration so bent on undermining and reversing protections for clean water, rivers and public health,” said Bob Irvin, President of American Rivers.

“This is the kind of destruction that will be difficult and, in some cases, impossible to reverse. If the Trump administration and its supporters in Congress succeed in rolling back bedrock environmental protections and handing over our rivers to polluters, the health, well-being and natural heritage of our nation’s families and communities will be impoverished for generations to come. We cannot let that happen.”

The following rivers on this year’s list will be directly impacted by decisions from the Trump administration and Congress:

“Healthy rivers are essential to public health, our economy, and the well-being of our nation. We must insist that those tasked with managing our water resources have the best interests of the public in mind. America’s Most Endangered Rivers of 2018 highlights critical upcoming decisions and paints a stark picture of what’s at stake. It’s an important call to action that we must amplify nationwide,” said Jo-Ellen Darcy, former Assistant Secretary of the Army (Civil Works) and American Rivers board member.

On the #1 river on this year’s list, the Big Sunflower in Mississippi, members of Congress are pushing to undermine the Clean Water Act to resurrect the Yazoo Pumps, one of the most environmentally damaging projects ever proposed by the U.S. Army Corps of Engineers. If allowed to advance, it would be the first time ever that an EPA veto of a Corps project (the George W. Bush EPA stopped the project in 2008) was overturned by Congress, undermining the authority of the EPA to enforce the Clean Water Act.

The Yazoo Pumps Project would damage more than 200,000 acres of wetlands in the Big Sunflower River watershed in the heart of the Mississippi River Flyway. More than 450 species of fish and wildlife, including the Louisiana black bear, rely on the wetlands habitat that would be drained by the project.

“The Yazoo Pumps are a boondoggle of the worst kind,” said Collin O’Mara, president and CEO of the National Wildlife Federation. “Why would anyone want to spend hundreds of millions of taxpayer dollars to destroy an astonishing 200,000 acres of vital fish and wildlife habitat—just to benefit a few landowners? This project is pure folly that falls apart under the slightest scrutiny.”

The Lower Rio Grande, #4 on this year’s list, is threatened by border wall construction that would cut the Rio Grande off from its floodplain, potentially exacerbating flooding and erosion and blocking access to this life-giving resource for people and wildlife.

“There is nothing American about building a border wall that threatens a great river and its wildlife and tears communities apart. This wall is wholly contrary to our nation’s values. Echoing President Reagan in West Berlin in 1987: Mr. Trump, tear down this wall,” said Theodore Roosevelt IV.

“Water and rivers are an essential part of our life and if we don’t preserve them we’ll be doing an infinite amount of damage to future generations,” Roosevelt said.

Threats facing many of America’s Most Endangered Rivers® of 2018 would have a significant impact on indigenous, Latinx, and African American communities. Destroying the Big Sunflower’s wetlands would impact subsistence fishing for low-income families and communities of color. Mining in Bristol Bay and the South Fork Salmon would harm wild salmon runs, which are central to the cultures and livelihoods of Alaska Natives and Native American tribes respectively. A wall along the Rio Grande would prevent people from accessing the river and create additional flood risks and other challenges for border communities.

“Every drop of water we drink connects us to a river. If our rivers aren’t healthy, our communities aren’t healthy,” said Irvin. “The America’s Most Endangered Rivers report is a call to action. Everyone deserves safe, clean water.”

In its 33rd year, the annual America’s Most Endangered Rivers® report is a list of rivers at a crossroads, where key decisions in the coming months will determine the rivers’ fates.

Rivers are chosen for the list based on the following criteria: 1) The magnitude of the threat, 2) The significance of the river to people and nature and 3) A critical decision-point in the coming year.

Over the years, the report has helped spur many successes including the removal of outdated dams and the prevention of harmful development and pollution.

AMERICA’S MOST ENDANGERED RIVERS® OF 2018

American Rivers protects wild rivers, restores damaged rivers and conserves clean water for people and nature. Since 1973, American Rivers has protected and restored more than 150,000 miles of rivers through advocacy efforts, on-the-ground projects and an annual America’s Most Endangered Rivers® campaign. Headquartered in Washington, DC, American Rivers has offices across the country and more than 275,000 members, supporters and volunteers.