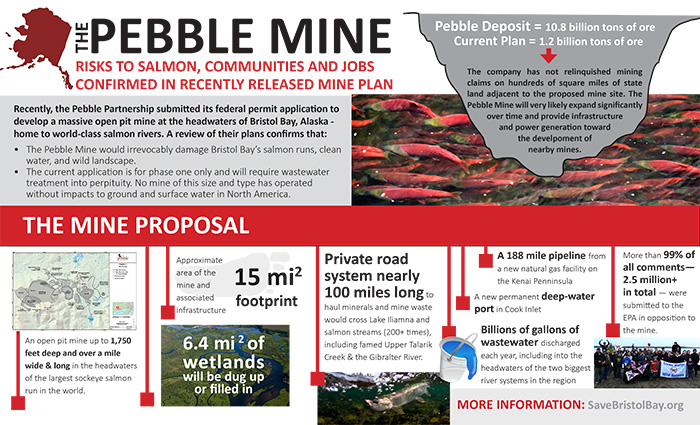 Soon, we are expecting the opening of another national comment period related to the Pebble mine proposal. This will be unlike any public process Alaska has seen before: it will be a rushed attempt to fast track what has become one of the most controversial projects in our state’s history. Before this begins, we wanted to update you on recent news related to Bristol Bay.

In December, we finally got a look at one of Pebble’s major permit applications. The mine plan laid out in the documents filed by Northern Dynasty Minerals with the U.S. Army Corps of Engineers makes two things abundantly clear:

Luckily, Alaska’s Governor Bill Walker has stated he is not supportive of the Pebble Mine. Still, it remains clear that Pebble’s permit review process will only be as stringent as the public demands.

Within the next month, we’ll be entering the first of many public comment periods as Pebble’s mining application is reviewed. Though we’ve spoken up dozens of times in the past, we need to continue to do so. We will contact you with ways you can make a difference.

Please stay tuned and help spread the word that our efforts are needed to protect Bristol Bay now more than ever.

FACTSHEET: Click here to learn more about what’s being proposed in Pebble’s Phase One Mine Plan

Pebble in the News