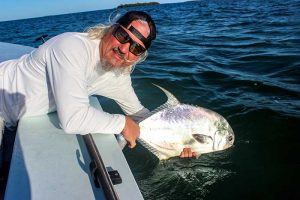 Al Perkinson, Executive Vice President of Marketing at Simms Fishing Products, has joined the board of Bonefish & Tarpon Trust, a non-profit science-based organization dedicated to conserving and restoring bonefish, tarpon and permit fisheries and habitats through research, stewardship, education and advocacy.

“As fisheries and habitats face increased challenges from environmental issues and natural disasters, organizations like Bonefish & Tarpon Trust are more critical than ever,” said Perkinson. “By spearheading cutting-edge research efforts, BTT is leading the way to make our most precious fisheries healthier. And that is good for all anglers who care about saltwater fishing.”

Prior to joining Simms in 2016, Perkinson served as Vice President of Marketing for Costa, where he helped increase the company’s sales 1500% during his 11-year tenure. He also created Costa Films and has produced nine short films, one of which won the sustainability award from Sundance in 2012.

Perkinson majored in sculpture at North Carolina’s St. Andrew’s University before earning a master’s degree in arts administration from Columbia University. He began his career at Ogilvy & Mather Advertising in New York City. Before joining Costa, Perkinson was Vice President of Account Service at Henderson Advertising and VP Group Brand Manager at Bank of America.

Widely regarded as one of the most influential people in fisheries conservation, Perkinson received the Lefty Kreh Sportsman of the Year Award from Bonefish & Tarpon Trust in 2014 and was named Angler of the Year by Fly Rod & Reel in 2015. He is also a member of the Explorer’s Club in New York City.

“Al has been a great advocate over the years for our flats fisheries,” said BTT President Jim McDuffie. “We’re very fortunate to have his expertise and leadership as we shape our future conservation efforts.”