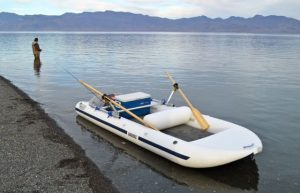 The owner of AIRBORN Inflatable Boats is retiring and all company assets are for sale. The assets include important patents, product designs and marketing knowledge vital to building an authentic international brand in the water sports field.

This asset sale presents an exceptional opportunity for companies as well as individuals to capitalize on a series of product developments made by this small company over the past few years. The company introduced its first inflatable, the 12.5 foot Bare Bones, at the Miami International Boat Show in 2013. Boating Magazine named the Bare Bones a “must see boat at that show,” an honor bestowed on only 14 boats out of hundreds on display. Additional positive comments came from the Miami Herald, Coastal Angler, Cruising World, Fly Life Magazine and Midcurrent.

Attention from the press and the industry was due to the innovative design. The Bare Bones is a fully functional high-quality fishing boat that can be packed up and transport- ed in the trunk of a small car or carried as checked baggage on a commercial airline. It comes with a high-quality lightweight aluminum rowing frame that allows anglers to float and fish Class-2 streams and it has a hard transom to carry a small motor. But it is the Bare Bones “drop stitched” floor that had show attendees buzzing. This high pressure floor allows two adult anglers to stand up and cast, a desirable feature not available on kayaks and most other small fishing boats.

IMPORTANCE OF “STAND UP” TECHNOLOGY

Early inflatables were portable but had floors that were made from one sheet of synthet- ic rubber, making standing difficult. This problem was addressed with wood or alu- minum planks for stability but at the expense of portability. The drop stitch technology developed by the US military solved this dilemma. Because the Bare Bones floor is the same construction used to make inflatable stand up paddle boards (SUPs), when Air- born founder Dick Swan received the first Bare Bones sample the light bulb went on. With only slight modifications the floor could also serve as a fully functioning stand up paddle board. Work began immediately on a new model, the Airborn “360”.

A year later in 2014 the company introduced the “360” at the ICAST show in Las Vegas, Nevada along with the 10.5 foot FishDeck, a paddle board designed specifically for fish- ing. Both products introduce new features, both are consistent with Airborn’s design goals to keep products lightweight and highly packable. But the revolutionary thing about these two products is that the FishDeck paddle board is also the floor of the “360”

inflatable boat. To understand this “two in one” break-through concept please watch this youtube video interview published by Kayak Angler.

Why is the Airborn 360 a break-through product? The “360” combines key features of stand up paddle boards and inflatable boats to create a whole new concept in the water sports field. It offers, for the first time, an inflatable boat with a high pressure floor that, when removed, is a high performance paddle board. The design provides the consumer with a two-for-one product that allows their hard earned money to bring more fun for each dollar spent. It is not an accident that the US Patent Office issued a broad utility patent on the idea in 2016. Please view a youtube video demonstration of this patent here.

The idea of incorporating a paddle board into an inflatable boat design is simple enough but the implications are far reaching and obvious. It is logical that many if not most in- flatable boats in the future will have high pressure floors that can double as some kind of paddle board. Why? Because only small changes are necessary to add significant value to the consumer. Since most inflatable boat floors already have a paddle board shape, all the manufacturer has to do is add removable fins to the bottom for directional tracking, a non-slip traction pad for standing, and some D-rings for securing gear and the floor becomes a fully functioning inflatable paddle board. In other words, for only a few dollars a manufacturer can add hundreds of dollars of value to their product.

This type of innovation drives marketing leadership and creates world class brands. This is the opportunity that is being offered by this asset sale. It is a great chance for water sports suppliers, product developers, entrepreneurs and anyone interested in owning and/or building an authentic international brand.