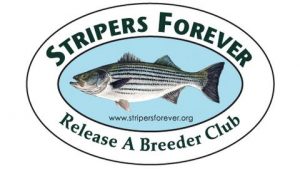 For the second consecutive year, Cheeky Fishing and its sister brand, Wingo Belts are proud to team up with Stripers Forever for the Release a Breeder Club. Launched in 2015, the Release a Breeder Club (RBC) is a nonexclusive angling community designed to encourage the conservation and preservation of large, breeding sized striped bass through proper catch and release practices. This year, hundreds of dollars worth of Cheeky Fly and Spinning Reels, as well as Wingo gear will be up for grabs for anglers that safely release stripers of 36” inches or more in length.

The Release a Breeder Club is free to join and open to both fly fishing and conventional tackle anglers. To join the RBC, anglers must catch and safely release a striped bass of 36” inches or more in length, and document the catch with either a photo or witness. Every RBC member will receive a gift card from Cheeky Fishing, RBC swag, and a certificate commemorating his or her membership. In addition, the angler that catches and releases the largest striped bass of the season will receive a Cheeky Mojo 425 Performance Reel, while the anglers that catch and release the second and third largest bass will win a Cheeky Boost 400 and Tyro 375 respectively. Additionally, six other club members will be randomly selected to win other prizes during the year including Cheeky CYDRO Spinning Reels and Striped Bass Wading Belts from Wingo Belts.

Over the last few decades, commercial fishing practices and Striped Bass regulations have led to stark declines in the populations of these trophy fish. As more breeding sized stripers are removed from the population, fewer juvenile bass are reproduced to fill their place. The result has left a bleak outlook for the future of striped bass sport fishing in the Northeast. Cheeky Fishing, Wingo Belts, the Release a Breeder Club and the Stripers Forever organization seek to promote the catch and release of large striped bass to ensure the preservation of the species for years to come.

“The Release A Breeder Club was born as a grassroots effort to encourage anglers to release these larger breeding size stripers,” said Taylor Vavra, National Board member of Stripers Forever. “Stripers Forever is thrilled to be partnered with Cheeky Fishing and Wingo Belts for the 2016 season and we thank them for their support in our conservation efforts.”

To learn more about Stripers Forever and the Release a Breeder Club, visit www.stripersforever.org/release-a-breeder-club.