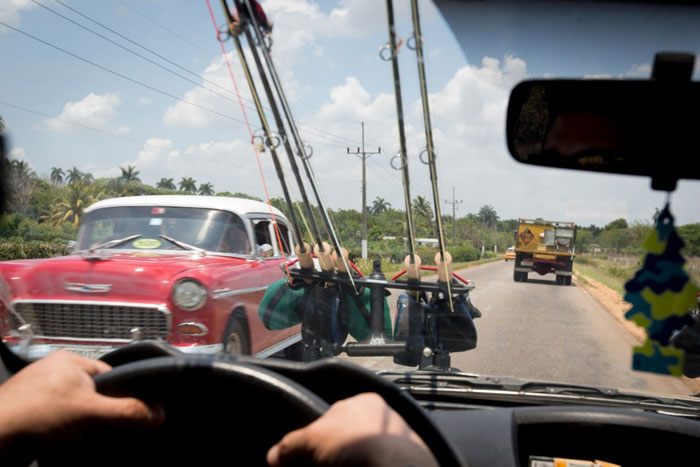 Orvis just announced that it would begin offering fishing and cultural trips to Cuba.   The fact that the largest fly-fishing company in America would do so is a big enough deal for CNN to cover it.  I happened to be along with Orvis and CNN when they put that story together.

I outlined my general impressions on the Orvis-Cuba trip for a piece I did for fieldandstream.com but to summarize for the more fly-focused business audience here I’ll reiterate a few points:

The rush is on, as American anglers now comprise 80 percent or more of flats visitors now, at least in some places, according to certain guides.  I expect that to only increase.  I was shocked to hear, upon my return, how many of my fishing friends had either just been, or were planning to go in the next several weeks.

Orvis spent considerable resources and effort over the past 18 months to ensure that its program is perfectly compliant with the current “people-to-people” visa guidelines, and there is quite a bit of culture packed into the agenda, including the full Havana, Hemingway included.

This is a “dialed” trip, and a good one to bring a spouse or friend on, regardless of how much the significant other likes to fish. The flight is easy… from Miami, it’s like the hop from Chicago to Grand Rapids Michigan, over the lake.  Florida is, in many ways, Cuba’s “Upper Peninsula.”

I’ve heard many good things about the fishing all around Cuba, but have no personal basis for comparison related to what I saw.  What I saw was great.  We fished a flat near the Bay of Pigs.  It was an easy two-hour drive from Havana to the lodging, another 45 minutes to the boats.  Only four boats work hundreds of thousands of acres of flats on a given day.  The guides are great, fluent in English, and extremely conservation minded.  I’d rate the flats in Zapata National Park among the most beautiful I’ve seen anywhere.  We saw permit, and caught many bones, mostly around three pounds in size.  The program also includes fishing a tarpon river.

The lodging was fine, and the food was really good, especially at the local paladares restaurants, which represent a small slice of the slowly emerging private economy in Cuba.

I’d go back in a heartbeat.  I expect many of your customers will want to go also.

Packages start at just over $6000 per person, and the company will run trips starting in the fall, 10 rods per group.  Contact Orvis for more details.