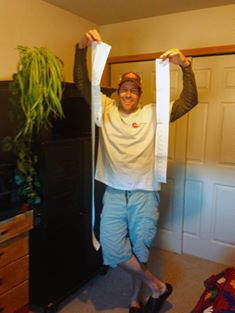 Robert Younghanz, “The Bug Guy” with two days of sales receipts for his DVD after a story recently dropped in TROUT magazine

As most of you know, Tim Romano’s and my alter egos, when we are not making Angling Trade and Angling E-News, is to produce TROUT magazine, the national publication of TROUT Unlimited. We are particularly proud of the latest issue, because it broke an all-time advertising sales record (ad sales have grown over 300 percent in the past three years). And we invite those of you who aren’t already doing so to realize the power of TROUT, the most widely-distributed and read publication in fly fishing.

What we do, is save lakes and rivers. And mentor future anglers. TROUT is about lifestyle, and culture, and families. We feature great writing (including a lot by women authors and editors) and photography… but we also give the microphone to the grassroots, and a lot of new writers and photographers find their breaks in our pages. It isn’t always high art, but it’s always honest.

And ad dollars spent on TROUT defray production costs so more money can be spent on lakes and rivers, trout and salmon. Contact Tim Romano [email protected], to get in on one of the next two issues, sure to generate much attention, as they will feature themes of public lands and climate change…