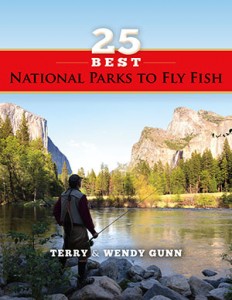 The book – “25 Best National Parks to Fly Fish” – was researched, written, and edited by Terry and Wendy Gunn and Bennett Mintz. Individual park chapters were written by guides, fly shop owners and outfitters who provide services to each of the parks and nearby waters from Acadia in Maine to Katmai in Alaska.

The book’s foreword was written by Jonathan B. Jarvis, Director of the National Park Service.

Of America’s 57 National Parks, 29 have some degree of fresh or saltwater fly fishing. Twenty-five of the parks are covered in full detail. Four parks – Dry Tortugas, 70 miles west of Key West., Fla.; Isle Royale, on Isle Royale and adjacent islands in Lake Superior; Voyageurs, on the U.S.-Canadian border in Minn.; and Wrangell-St. Elias, in remote Alaska – are discussed to a lesser degree because of their limited access.

“25 Best National Parks to Fly Fish” is organized as a foundation for the ultimate “bucket-list” fly fishing road trip from the Northeast through the Shenandoah, into the South and eventually out West so that readers can literally turn the page and arrive at the next National Park with the information to have an enjoyable and productive fishing trip and visit to the park.

The book recognizes that there are miles and miles of notable surrounding waters – some just as good, some better – than the park itself. So “park waters” include nearby communities, forest lands and other notable fishing opportunities.

“Fly-fishing in many parks is a longtime American tradition; but there are National Parks with outstanding fishing that are largely ignored by anglers and more renowned for river-running, back-packing, sight-seeing, rock climbing, animal viewing or photography,” said Clouse.

While Grand Canyon hosts some 5-million visitors annually, few venture below the sight-seeing rim; yet dedicated fly-fishers catch trout throughout. Rainbow trout predominate, but browns are caught throughout the system and can be found in higher densities in particular areas … the majority of the catch ranging from 12- to 16-inches.

In South Carolina, Congaree National Park, near Columbia, boasts swamp-like conditions with a variety of fish. The Congaree River flows easterly to form the southern boundary of the park with large numbers of small and largemouth bass. In the spring, stripers up to 40 pounds migrate to spawn in the upper stretched of the Congaree River and then move into the Saluda River for the summer.

Each park consists of a single chapter with the exception of Yellowstone. Because of its size and number of fly-fishable waters extending beyond the park boundaries, Yellowstone Park is divided into four chapters. Yellowstone chapter authors are Bob Jacklin, Walter Wiese, Bruce Staples and Tim Wade. Adjacent Grand Teton National Park, written by Scott Sanchez, is a separate chapter.