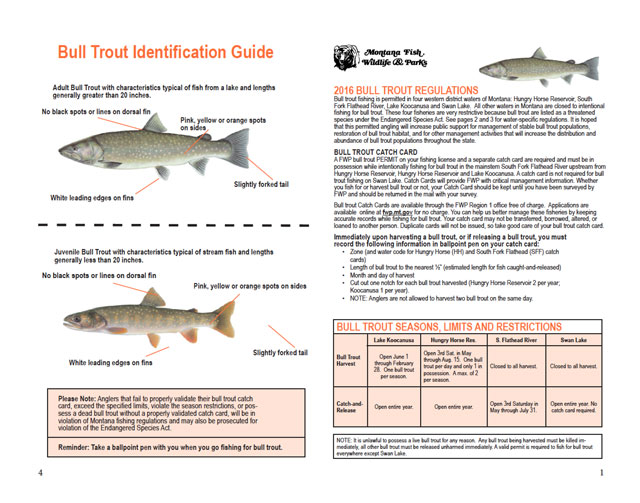 If you commit a crime—and hope to get away with it—best not film those exploits and share them with the public. Case in point, Montana Fish, Wildlife & Parks (FWP) and the United States Forest Service’s (USFS) last week released results from a two-year investigation targeting Montana Wild, the Missoula-based flyfishing film company that did just that.

Montana Wild produces hunting and fishing videos on its website and is owned and operated by brothers Zach and Travis Boughton. Their films are also known entities in the flyfishing community. They’ve been featured in the Simms Shoot Out, on The Drake Magazine’s Flyfishing Video Awards, and as part of the Fly Fishing Film Tour (F3T) lineup in recent years. But it was video footage from a 2013 trip to Montana’s Bob Marshall wilderness that has recently become Montana Wild’s pièce de résistance—for all the wrong reasons.

The saga started when the Boughton brothers and associate Anthony Von Ruden violated federal law by venturing onto USFS lands to shoot a commercial film on bull trout fishing without proper permits. And they violated state law, 38 citations total, by illegally targeting bull trout in South Fork Flathead River tributaries on the same trip. Perhaps worse, sifting through more than 2,200 videos obtained by search warrant produced evidence of Montana Wild “…messing with the fish for 15, even 20 minutes,” said FWP Criminal Investigator Brian Sommers. “There were some they’d release, that would just go right to the bottom and lay there.”

Montana Wild has since been slapped with close to $6,000 in fines. The Boughtons pleaded guilty to 11 federal citations involving illegal commercial filming in and near the Bob Marshall Wilderness. They, and Von Ruden, also plead guilty to 38 state violations for intentionally fishing for bull trout in closed waters, failing to immediately release bull trout, and failing to report a bull trout on the required FWP catch card.

In addition, this series of failures led to a film xanax bars cost trailer on bull trout fishing in “the Bob” that was quickly dropped from the Fly Fishing Film Tour (F3T) website after “…we learned that Montana Wild hadn’t procured a permit to film in the wilderness,” says F3T spokesperson Ryan Thompson.

In a statement released this week on their website, the Boughtons maintained that, “Each and every fish handled during the filming of this project was carefully released to see another day.” As for the issue of commercial filming without a permit, they blame the Film Commissioner at the Montana Film Office for leading them astray. “We later found out that the advice we were given was not true to the law.”

Montana Film Office Commissioner Deny Staggs, in an article published this morning in the Missoulian, said he remembered those conversations and, “From my point of view, they were trying to find a way to not get a permit.” The Boughtons never told Staggs they intended to produce a flyfishing film from the trip for film tours, he added, which would also make it a commercial undertaking.

As for its short time in the F3T mix, Montana Wild has set itself up as an exceptional case study for filmmakers walking that ethical tightrope between trying to grab epic footage and the #keepemwet mindset. Thompson said this ruling should serve as a reminder to filmmakers of what actions aren’t acceptable in pursuit of good shots. “And it will certainly serve as a reminder to us that though best practices are generally being adhered to, we can’t always assume that’s the case. There needs to be a detailed ‘where’ and ‘how’ conversation alongside the selection of any film we include in the tour.”

The Boughtons, who are not accepting interview requests, said in their statement that they’re ready to move on. “Our hope is that a look at our body of work and actions will speak louder about our intent and values as outdoorsman than a simple and honest mistake.”