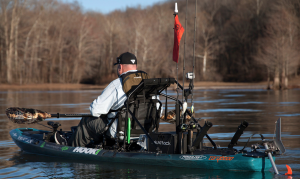 Kayaking has undergone a major change in the last few years. No longer is it just paddling around on the lake by grandpa’s log cabin or shooting down rapids like a lunatic. Kayak fishing posted a one-year growth rate of 28%, with 1.8 million fishermen accounting for over 39 million outings in 2014. That makes it the second-fastest-growing outdoor sport, just one percentage point behind stand-up paddleboarding. Many of these outdoor enthusiasts are using electric propulsion, such as the Torqeedo Ultralight 403 outboard motor, to enhance the experience and their chances of making a big catch.

Today, kayak anglers are chasing everything from largemouth bass to blue marlin on fly, light and heavy tackle. They’re even getting in on the tournament scene, with a number of big-time events offering some serious cash and prizes.

Chad Hoover is a former kayak fishing guide who turned his passion into his profession. He hosts web-based and broadcast TV shows, such as Kayak Bassin with Chad Hoover. Cost, accessibility, and healthful activity are some of the forces driving anglers toward joining the “plastic navy”.

“Kayaks are significantly less expensive than traditional fishing boats to purchase and use. Manufacturers are competing for this new segment by building wider, more stable boats that have plenty of room for fishing gear and electronics,” said Hoover.

“Kayaking offers up a whole new world of accessibility to your local waterways, and to the best fishing holes. You’re no longer limited by boat ramp access, long lines and parking woes, you can have your kayak off the rack and in the water in just a few minutes. It’s also great exercise.”

Hoover is director of the highest-payout kayak fishing tournament in the world, the $20,000 Kayak Bass Fishing Championship, held on March 25. The event is sponsored by Torqeedo, a leading manufacturer of electric motors for kayaks and other watercraft, as well as a number of other businesses that are taking the rise of kayak fishing seriously. The first Kayak Bass Fishing Open, a qualifying event for the championship, drew almost 200 anglers.

Recently named to direct Torqeedo’s prostaff, Hoover got his start with the company while stationed in Stuttgart, Germany as a US naval officer. “I was interested in getting involved because of my work with disabled veterans, people that could enjoy kayaking but may not be able to paddle long distances or at all.” But, it quickly became apparent to Hoover that the motors had wider applications for serious fishermen.

“Torqeedo has been my secret weapon for a long time,” said Hoover. “It helps me cover water and get to places I wouldn’t be able to explore without it.” His engine of choice is the Torqeedo Ultralight 403. Its compact, waterproof design and rechargeable power cell have proven an incredible addition to his angling arsenal. “Until you use one, you really don’t understand it,” said Hoover. “I’ve never been a big troller, but Torqeedo changed the way I think about my fishing.”

More information on Kayak Bassin with Chad Hoover can be found at www.youtube.com/kayakbassinTV, while those interested in learning about the Kayak Bass Open or Championship can head to www.kbfopen.com.