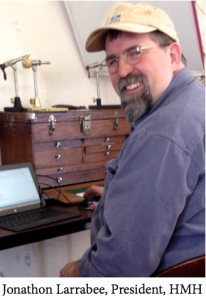 “Our immediate objective is to implement some improvements in form and function on our current lineup of vises while making some process improvements that will allow us to move parts through the shop faster and more efficiently”, says Larrabee, “but the vises will still be hand finished and assembled by hand, one at a time.” He adds, “We also anticipate resurrecting some of the earlier HMH products while we also design and build the next generation of HMH vises.”

Since 1975, HMH fly tying vises have been giving tyers years of dependable service, longer than any other brand. The original HMH vise revolutionized vise design incorporating components precision-machined from the highest quality materials, and design features never before found together in a fly tying vise, including 360-degree rotation, an exclusive disc drag rotary tension adjustment, and quick-change, hardened, interchangeable jaws. HMH vises today still adhere to the same principals of simplicity, elegance, and power in its expanding line of fly tying vises and accessories. HMH currently manufactures five models of vises — the SX, Spartan, Standard the Premium Hook/Tube crossover vise, and the Spinner tube fly vise — and a complete line of tubes and accessories for tying tube flies. HMH products can be seen at www.hmhvises.com

HMH Vises, makers of precision-machined fly tying vises, is pleased to announce that Jonathan Larrabee has joined the company as President and majority partner. Jon has been machining and building Vom-Hofe style fly reels since 2008 and brings to HMH 25 years of industrial design and manufacturing experience. Jon has designed and manufactured components for everything from Nuclear Submarines to fire trucks in his career.

John Albright, President Emeritus of HMH says “We’re excited about the expertise that Jon brings to HMH, encompassing not only new ideas, but also technical skill as a machinist, problem solving, and a solid grasp of manufacturing processes, all of which can only mean good things for the lineup of HMH vises and accessories.” John will continue at HMH focussing on outreach and product development.