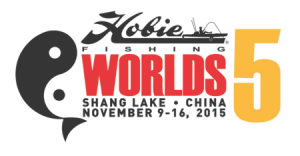 The fifth annual Hobie Fishing World Championship (HFW5), presented by Rhino-Rack™ and hosted by Hobie Cat® Australasia, will take place on Shang Lake in Changshu, China November 9-16 of this year. Located in the central eastern part of the country, Changshu is steeped in Chinese history, starting in 770 BC, and will be a memorable experience for all attendees.

Anglers from over twenty countries are expected to compete in China’s first-ever HFW for the chance to be crowned this year’s Hobie Fishing World Champion. All competitors will fish for Chinese Perch, Topmouth Cutler and Yellowcheek Carp from identically rigged Hobie Mirage® Pro Angler 14’s, provided by Hobie Cat Australasia and outfitted with Lowrance® Electronics and Power-Pole® MICRO™ Anchors.

“It’s hard to believe that we are looking at our 5th World Championship,” commented Steve Fields, Managing Director Hobie Cat Australasia. “Each event has taken Hobie fishing to a new level. Number five promises to continue the tradition and be a big eye opener to all the competitors as they experience new fish and a very old culture.”

A series of five qualifying events to be held in the U.S. and Canada will give anglers the opportunity to qualify for five coveted spots on the North American team. Dates and locations for the qualifiers will be announced soon.

The tournament will be a traditional CPR (Catch, Photograph and Release) format in which each competitor will enter his or her three best lengths in aggregate each day. The angler with the highest cumulative length over the three day period will be crowned Champion. Prizes will also be awarded to the top team representatives. Each participating country will be represented by at least one two-person team and combined measurements will be added to determine the Team Champion.

Since 1950, Hobie has been in the business of shaping a unique lifestyle based around fun, water, and innovative quality products. From their headquarters in Oceanside, California, Hobie Cat Company manufactures, distributes, and markets an impressive collection of eco-sensitive watercraft worldwide, with subsidiaries; Hobie Cat Australasia, in Huskisson, NSW, Australia and Hobie Cat Europe, in Toulon, France and independent distributors; Hobie Kayak Europe and Hobie Cat Brasil. These products include an ever-expanding line of recreation and racing sailboats, pedal-driven and paddle sit-on-top recreation and fishing kayaks, inflatable kayaks, fishing boats and stand-up paddleboards, plus a complementary array of parts and accessories.