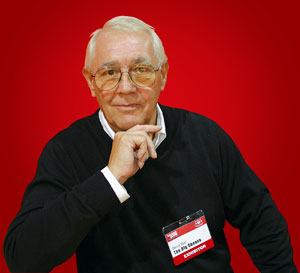 David died peacefully in his sleep this morning after a short spell in hospital. He was diagnosed with cancer almost two years ago and had spent the past 12 months at home being cared for by his wife, Cherry. Throughout that period, David continued to take an active role in the running of DHP and asserted that the only thing keeping him from the office was an arthritic ankle!

From an outspoken beginning, David went on to become part of the establishment he’d called to task so often and became chairman of the Angling Trades Association in the 90s.

He leaves behind Cherry, two sons Robbie and Jamie and daughter Jemma plus two grandchildren Archie and Isaac.

Once details of David’s funeral arrangements are known we shall pass them on.

Anyone requiring further information or background should call DHP’s managing director Sean O’Driscoll on 07788 922976 or operations director Roger Mortimer on 07770 626034.