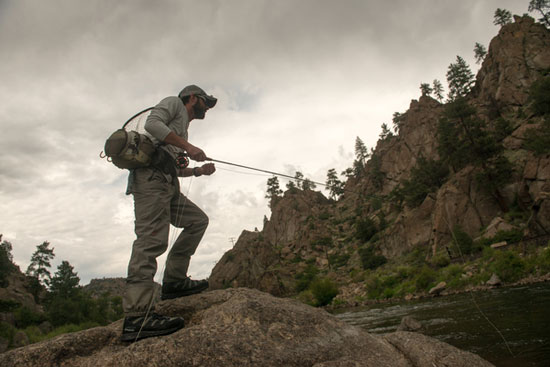 Colorado sportsmen today praised President Obama’s designation of Browns Canyon as a new national monument, the culmination of years of effort to protect a Colorado backcountry treasure beloved by generations of anglers, hunters, rafters, and hikers.

“I’m thrilled,” said Jim Impara, vice president of the Collegiate Peaks Chapter of Trout Unlimited in Salida. “Browns Canyon is one of those special places that draws rafters, hunters and anglers from all over the world. This action ensures that Browns’ wildness and rare beauty will be there for our children and grandchildren to enjoy.”

“Those of us who have rafted, hunted and fished Browns Canyon for years know what a gem it is. People come from all over the country for the whitewater rafting on the Arkansas River. It’s habitat for mule deer, elk, bighorn sheep and raptors and offers some of the best fishing in the region,” said Bill Dvorak, a longtime rafting guide and public lands organizer for the National Wildlife Federation. “The designation has been a long time coming and the community, hunters, anglers and Coloradans overall are grateful this stunning landscape will be conserved.”

“This is a great day for Colorado and for sportsmen,” said Tim Brass, Southern Rockies Coordinator for Backcountry Hunters and Anglers. “Browns Canyon is the gold standard for backcountry hunting and fishing habitat. Protecting this last bastion of wild country along the Arkansas River ensures that herds of elk and deer have high-quality winter range and anglers can pursue wily trout in an outstanding Gold Medal fishery.”

For years, sportsmen’s groups have been pushing for monument status for Browns Canyon. TU, NWF and BHA organized local hunters and anglers to voice their support and attend numerous local meetings and public forums. The groups cited Brown’s important fish and wildlife habitat, as well as its role as an economic driver for Colorado’s $1.2 billion fishing economy and $500 million hunting economy. Browns Canyon is also the single largest contributor to Colorado’s $140 million whitewater rafting industry.

“Sportsmen can be proud that they helped deliver this victory for Browns,” said David Nickum, executive director of Colorado Trout Unlimited. “Our local roots and deep knowledge of these places carry weight with lawmakers and federal officials. Hunters and anglers understand the value of our public lands and wild backcountry, and we’re committed to protecting these magnificent resources and our outdoor way of life.”

He added, “We especially thank Sen. Udall for his dedication and persistence in pushing for a Browns Canyon monument. He has been a valued voice for sportsmen and for commonsense conservation.”

For more information about Browns, go to www.sportsmenforbrowns.com.

Trout Unlimited is a non-profit organization with 147,000 members nationwide dedicated to conserving, protecting and restoring North America’s coldwater fisheries and their watersheds. Colorado Trout Unlimited has 24 chapters and more than 10,000 members in the state.

Backcountry Hunters and Anglers seeks to ensure North America’s outdoor heritage of hunting and fishing in a natural setting, through education and work on behalf of wild public lands and waters.