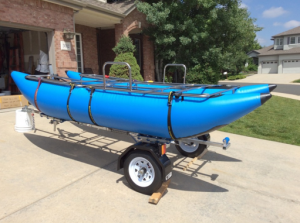 Bulldog Folding Trailers USA introduces a unique new product to help outdoor enthusiasts maximize their fun – a sturdy, road-worthy trailer that can carry a variety of gear from home to the outdoors and folds up to stow in a space smaller than a broom closet.

Developed in Australia, the trailer can be configured to carry boats (kayaks, canoes, dinghies), motorcycles and, as a box trailer, anything else needed on outdoor adventures. The trailers will be demo-ed at Outdoor Retailer Summer Marketplace in the Pavilions , booth PV1078 August 6-9, 2014

Bulldog Folding Trailers are also available now to consumers via www.bulldogfoldingtrailers.com at a range of $1,290 – $2,958 for the various configurations. Additional accessories and parts are available via the web site.

Seeking a solution to meet his own outdoor needs, Jeff Drugmand discovered the fold-up trailers on the Internet. “I needed a compact solution to transport my fully-rigged fishing kayak from the campground to the ocean,” says Drugmand, a lifelong outdoor enthusiast. Drugmand quickly realized how many fellow adventurers need to carry more than a carful of gear but were limited the storage space previously needed for such a vehicle. He became the U.S. distributor for Bulldog Folding Trailers in April of this year.

The trailers weigh 132 lbs. and can carry up to 850 lbs. Certified by the National Association of Trailer Manufacturers, the trailers meet its stringent guidelines – a compilation of federal safety standards and industry best practices.

Bulldog Folding Trailers was founded in Australia when Paul and Peggy Crane purchased the intellectual property for the first folding trailer. Initially developed for boats, the Cranes soon recognized the trailers could be customized to carry a variety of items in many configurations.

JJ Outdoor Enterprises (dba Bulldog Folding Trailers USA) is headquartered in Erie, Colorado. The company is a subsidiary of Boulder Creek Outdoors, which carries a variety additional of outdoor gear, including the Kamplite Rooftop Tent, specifically engineered to meet the high standards of dedicated outdoors people.