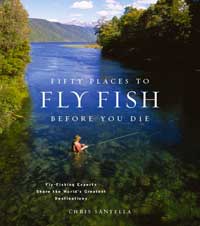 Starting in January 2015, World Fishing Network brings the powerful print fishing brand to the screen with Fifty Places to Fly Fish Before You Die, taking viewers to some of the world’s premiere fly fishing destinations.

Hosted by Conway Bowman, recognized for his pioneering efforts to catch mako sharks off the Southern California coast, Fifty Places to Fly Fish Before You Die will not only visit the locations but will feature anglers profiled in the book, providing bothinsider knowledge and a strong sense of the intangible appeal of each setting. Season One episodes will include:

Fifty Places to Fly Fish Before You Die immerses the viewer into the true character of each destination not only through fishing, but also by exploring the history of the fishery, its cultural attributes, geography and much more. Everything from nearby ancient ruins to the go-to place for post-fishing storytelling and local character is explored as viewers come away inspired to gear up and pack their bags for a new adventure.