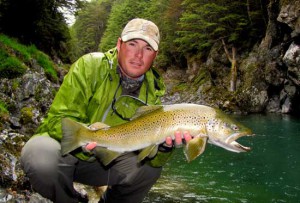 We’re thrilled to announce that one of the nation’s top anglers, Josh Graffam, is joining Umpqua on April 15, 2015. Josh brings his extensive angling experience to Umpqua where he will take the role of Key Account and International Account Manager. Josh, a graduate of the University of New Hampshire, began his professional angling career as a Guide at Jack Dennis Sports for six years. He then became Head Guide at The Ranch at Rock Creek, and has spent the past 3 ½ years as the Activities Director of Brush Creek Ranch in Saratoga, Wyoming.

“We’re thrilled to have such a talented and knowledgeable individual joining the Umpqua team. We are confident that Josh will apply his talents, experience and competitive spirit to his new position and will undoubtedly help us grow and excel in some key areas.”
— Jeff Fryhover, President and CEO, Umpqua Feather Merchants

Josh is a current member of Fly Fishing Team USA and is the 2013 National Champion—ranking him number one in the nation among competitive fly anglers. Additionally, Josh finished 13th in the World Fly Fishing Championship this past year and will be representing the U.S. again in Czech Republic at the end of May.

“I am excited to be joining a company with such a distinguished history and innovative approach within the world of fly fishing. I honestly believe that Umpqua has some of the most talented people in the industry, and I am eager to be a part of the team.”
— Josh Graffam