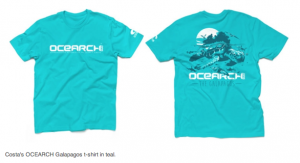 Costa Sunglasses continues its ongoing partnership with OCEARCH, a non-profit organization actively researching great white sharks and other oceanic apex predators, with the release of custom designed, limited edition gear supporting the program. A portion of the proceeds from the sale of Costa’s OCEARCH shirts and hats benefits the organization’s collaborative research expeditions around the world to study and advance knowledge on the ocean’s giants.

OCEARCH is known for its groundbreaking tagging of great white sharks and other apex predators, working with world-class fishermen, researchers and corporations like Costa in an effort to support governments and their fisheries in need of hands-on access to large, mature sharks. Its online Shark Tracker allows scientists, researchers and educators a first-hand look at the species’ migratory patterns and other data. Tagged great white sharks Mary Lee and Katherine, both originally spotted in the waters off the coast of Cape Cod, Mass., have routinely pinged in up and down the Atlantic coast, near locations including Charleston, S.C., Savannah, Ga. and Jacksonville, Fla.

In 2014, OCEARCH is on a mission to South America, visiting the Galapagos Islands, Chile, and Brazil to expand its tagging efforts to include yellow fin tuna, wahoo, rainbow runner, skip jack, while also working with White sharks and Tiger, Hammerhead, Bull, Blacktip and Silky sharks, among other species.

“Costa’s support allows us to create video content so that the world can see what happens on expedition. They see it on the Expedition Blog and by following Costa and OCEARCH on Facebook and Twitter.  Costa brings our collaborative shark research into everyone’s home and onto their mobile device, in near real time,” says Chris Fischer, OCEARCH Founding Chairman and Expedition Leader. “With the new line of Costa Limited Edition OCEARCH gear they are expanding their support so more work can be done for the ocean.”

Most recently, in the Galapagos Islands, the OCEARCH team tagged a mature female Blacktip shark, weighing 186 pounds and measuring over seven feet long. Costa named the shark “Judy,” after Judy Ferguson, one of Costa’s founders.

Costa custom designed the new t-shirts, and a limited edition OCEARCH trucker mesh hat, to raise awareness and proceeds for the research tagging program. These exclusive short sleeve t-shirts range from small to XXL, and retail for $24. The navy blue trucker hat, depicting an image of a great white shark, retails for $17.

“We support the OCEARCH mission to replace fear with facts when it comes to learning more about the ocean’s giants,” said Al Perkinson, vice president of marketing for Costa Sunglasses. “The more we can understand about how the oceans function, the better equipped we’ll be to help protect them.”

About OCEARCH
OCEARCH is a non-profit organization with a global reach for unprecedented ocean-based research on apex predators such as Great White Sharks, supporting leading researchers and institutions seeking to attain groundbreaking data on the movement, biology and health of sharks to protect their future while enhancing public safety. The support of Caterpillar Inc. allows OCEARCH to generate never had before data that is in turn shared on the Global Shark Tracker with the world for free – enabling students and the public to learn alongside PhDs. Costa Sunglasses provides principle support for video content filmed and edited on location aboard the M/V OCEARCH, so that it can be shared with the world in near real time. Additional sponsorship support is provided by Yeti Coolers, Contender, Yamaha, SAFE Boats, MUSTAD and Landry’s Inc.

For Costa, conservation is all about sustainable fishing. Many fisheries that should be vibrant and healthy are all but devoid of native fish because they have fallen victim to poor fishing practices, unregulated development, lack of watershed protection or all of the above. Costa works with partners around the world to help increase awareness and influence policy so that both the fish and fishermen of tomorrow will have healthy waters to enjoy. Costa encourages others to help in any way they can.