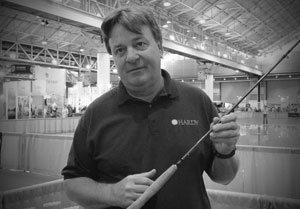 Jim Murphy, one of the leading entrepreneurial figures in the fly-fishing market, and the person who helped resurrect Hardy & Greys back into relevance in America in recent years, has left the company.  Pure Fishing, one of the largest conventional fishing tackle companies in the world acquired Hardy & Greys last year, and in Murphy’s words, the transition proved to be a challenge.

“I wouldn’t describe it as a falling out,” said Murphy in an Angling Trade interview.  “The integration of bringing Hardy & Greys into the fold came about at almost the exact time that (Pure Fishing parent) Jarden acquired Yankee Candle for 1.75 billion, which diverted resources from the integration process.  That made for an uncomfortable and difficult transition for everyone.

“There’s a reason why 75 percent of the businesses in the United States are small businesses.  (In terms of) organizational rigidity, there’s a problem of scale.  Scaling to protect the interests of specialty dealers will be difficult.”

Murphy said he is taking a break, collecting himself, and gearing up for another eventual venture in the fly-fishing arena in the near future.

We certainly hope so, and wish him luck.

Please stay tuned for the next print issue of where we’ll run a story, “What Murphy Thinks.”  You’ll read very candid opinions on the state of the industry, the future of retailers, opportunities and threats, integrating with conventional tackle, and so on, from an unfiltered, fly-fishing veteran’s perspective.