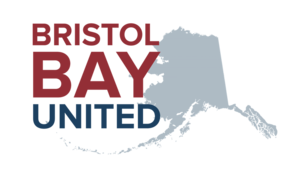 A diverse coalition of Alaskans today announced the formation of Bristol Bay United (BBU). BBU will demand action from the Obama Administration and elected officials to stop the Pebble Mine and protect Alaska’s jobs and way of life. Scientific studies show that an open-pit mine in Bristol Bay, Alaska could destroy up to 90 miles of streams and 4,800 acres of wetlands, and require the excavation of up to 10 billion tons of waste rock that will be stored in Bristol Bay forever. The Pebble Mine would put at risk the $1.5 billion fishing industry, the 14,000 jobs it supports, and thousands of years of Alaska Native culture and subsistence.

Bristol Bay United will harness the unprecedented grassroots opposition to the Pebble Mine to send a clear message to the Obama Administration that Pebble is the wrong mine in the wrong place.  BBU starts airing television ads in Alaska this Thursday featuring Alaska Natives, sportsmen, fishermen and retired Alaskan elected officials.

To view the television ad “Risk” that will begin running in Alaska on Thursday, please visit: www.BristolBayUnited.com

“There has never been a mine of this size and type that didn’t pollute the surrounding air, land, or water,” said Tim Bristol, Alaska Program Director for Trout Unlimited. “The risk to Bristol Bay from the Pebble Mine is simply too high. It’s not surprising that protecting Bristol Bay has spurred an unprecedented and diverse coalition of support within Alaska. Bristol Bay is a sportsman’s paradise and the last place on Earth you should dig a massive gold and copper mine.”

“For thousands of years, the Bristol Bay culture and economy has depended on salmon,” said Jason Metrokin, CEO of the Bristol Bay Native Corporation. “The Obama Administration has the opportunity to help preserve and strengthen our culture and way of life by protecting Bristol Bay for future generations.”

“The science clearly shows that the Pebble Mine would be a disaster for Bristol Bay’s salmon population, the $1.5 billion fishing industry, and the 14,000 jobs it supports,” said Bob Waldrop, Executive Director of the Bristol Bay Regional Seafood Development Association. “Our leaders in Washin gton need to listen to the concerns of Alaskan fisherman and eliminate the risks from the Pebble Mine now to ensure the continued economic health of the region.”
Bristol Bay United will be led by three Alaskans who have deep ties to Bristol Bay, including:

The Pebble Mine project is a proposed open-pit gold and copper mine at the headwaters of Bristol Bay, Alaska. An Environmental Protection Agency (EPA) assessment of the impact of the mine found that even without a major disaster or catastrophe, it would destroy up to 90 miles of salmon streams and up to 4,800 acres of wetland salmon habitat. During EPA’s public comment period on its assessment, nearly 75% of almost 900,000 people voiced support for EPA efforts to protect Bristol Bay. More than 98% of comments from the local towns and Native villages supported EPA and opposed the proposed Pebble mine.

Over 1,000 hunting and fishing groups and businesses, thousands of commercial fishermen in Alaska and across the U.S., 26,000 retail food stores, 225 chefs and restaurant owners, over 25 jewelers like Tiffany and Co., religious organizations and leaders, and many others support EPA action to protect Bristol Bay. In a state known for its strong support for resource development, polls show that nearly 60% of Alaskans and 80% of Bristol Bay residents oppose the Pebble Mine. BBU will ensure their voices are heard, both in Alaska and in our nation’s capital.