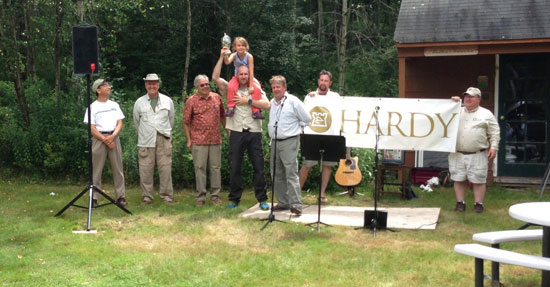 The Hardy Cup Cane Rod Casting Championship was held this year on August 4, and Michael Mauri won the competition with a total distance of 191 feet in two casts (includes a 15’ bonus because of the short rod used).    With a cast of around 100 and over hundreds of casts, the audience was treated to some amazing feats of casting skill.

Delisi consulted with Glenn Brackett who then built 3 prototypes, each in the same short length and stout weight, but one of them in a traditional 6-sided (hex) configuration, one in a 7-sided (hepta) and one 8-sided (octa) configuration.  These latter two offered some interesting dynamics, the booboys at Sweetgrass reasoned:  with smaller width strips, the rod would flex deeper into the rod’s butt section, and that would permit a master caster like Mauri the ability to make full use of the rod’s potential.

Mauri field-tested each and chose the 8-strip rod which, among the 3 rods, had the strongest tip.  With this rod he stepped up to the line and cast away.

Said Mauri, “My casting comes from years of fishing and practice.  I always tried to figure out my own way and in the end it is always about energy flow and having fun!”

Sweetgrass, whose beautiful rods are known as much for their performance as for their aesthetics, was proud to be able to participate in the event and gives high praise to Hardy whose professionally-run competition is a delight to observers and participants.

Mauri, in his typical modest way, said he felt like he could have done better, and is looking forward to participating in next year’s competition.