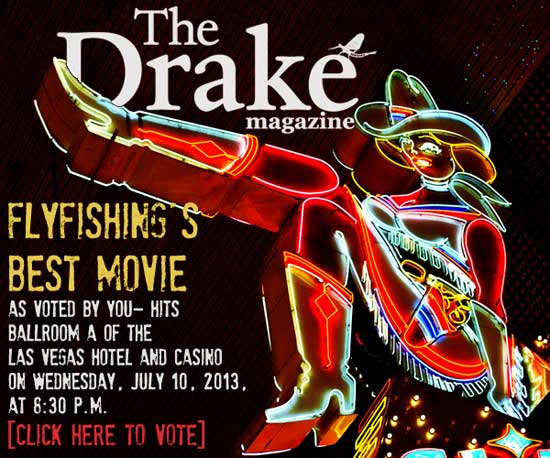 The 8th Annual Drake Magazine Flyfishing Video Awards, presented by Simms, is being held on Wednesday July 10, 2013, at 8:30 P.M. in Ballroom A of the Las Vegas Hotel and Casino.

“There is a considerable change in format to this year’s awards, with the biggest being seven new award categories, and no time limit on the entries,” says Drake Editor, Tom Bie. “The five-minute film contest was a great solution in 2006, since there were only a handful of flyfishing filmmakers, and even fewer full-length movies. However, times have changed.”

Billed as a “true awards show” the 2013 incarnation includes a dozen categories and 3 to 4 nominees per category, with winners being announced live, onstage, at Vegas.

Starting next year, all awards will be chosen from whatever body of work has been produced the previous 12 months. “But for this year, we’re basically making it a ‘Best of’ type show, and reaching back seven years or more to make it a showcase of all that’s been done up to this point,” Bie adds.

One of the new categories is Best New Film, with “New” in this case defined as “films that have not been seen anywhere before”—not on Vimeo or YouTube or the Filmmakers’ website. This category is for premieres only. The second new category is called Best of the Web, which is aimed at those many short films that do get posted online and that many people might have seen, but not on the big screen.

In addition, this year’s Reader’s Choice Award winner will be selected from a list of more than 40 top flyfishing films. Cast your votes today at drakemag.com/bestmovie. The deadline is July 5.

Here are the other nine awards categories:

—Best Fishing, Saltwater
—Best Fishing, Freshwater
—Best Conservation
—Best Story
—Best Humor
—Best Adventure (exotic, dangerous, far-flung)
—Best Profile (person in a film with the most character or personality)
—Best Cinematography
—Movie of the Year (must have been released after July of 2012)

Lastly, expect to see a couple “Special” awards that appear in Vegas. But you’ll have to show up at the Las Vegas Hotel on July 10 to see what those are.

Note to filmmakers: If you’re going to physically submit a hard drive or zip drive, The Drake needs to receive it before the Fourth of July at this address: