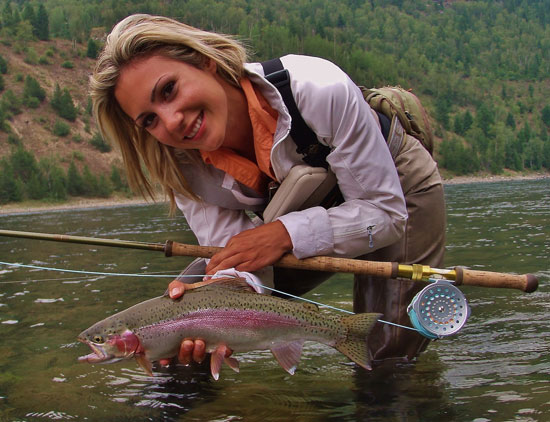 Bird Marketing Group and Vantage Point Media House are pleased to announce that April Vokey of Fly Gal Ventures has joined the International Fly Fishing Film Festival as a member of the Festival’s newly formed Ambassador Program. The program has been implemented to facilitate some of the significant growth that the IF4 has experienced since inception and will play a key roll in its growth and promotion moving forward. The deal will also see Fly Gal Ventures included as an official sponsor of IF4 effective with the 2014 screening cycle.

“April is a modern voice for the sport of fly fishing and brings with her a passion for the outdoors steeped tradition.”, says Bird Marketing Group President Chris Bird, “She possesses the rare ability to reach across a wide spectrum of demographics finding common ground with both young and old. April is a valued member of Fly Fusion’s editorial staff and we are excited to connect these dots and have her join the IF4 team as Lead Ambassador.”

“I have closely followed IF4’s introduction and progress in the fly-fishing world over the past few years and never have I been so sure that I wanted to be part of such a great team”, says Fly Gal Ventures President April Vokey, “Integrity, professionalism, entertainment and ambition lace the festival and I am comfortable attending the films whether it be with a ten year old child or a fellow fishing bum; the festival is geared to entertain and inspire all ages, levels and viewpoints. Every year this great event grows and there is no question that IF4 is sure to be a global leader. I am thrilled to be a part of this flourishing and inspiring team!”

April Vokey operates Fly Gal Ventures and is an avid angler and steelhead, salmon and trout guide. She is passionate about Spey casting to wild steelhead, the environment and tying Atlantic Salmon flies. April is a Federation of Fly Fishers Certified Casting Instructor, Fishing Ambassador with Patagonia, Field Editor for Fly Fusion Magazine and cast member with the popular television series Buccaneers & Bones.