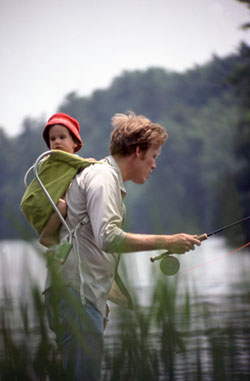 The other day, I pulled a copy of The New American Trout Fishing by John Merwin off my shelf and thumbed through it.  It’s a first edition copy, and it had been given to me by my wife for my birthday in 1994.  As I leafed through the pages, it occurred to me what an honor it was to have become a colleague of John Merwin at Field & Stream magazine some nine years after receiving that gift.  And I felt profound sadness because the reason I was revisiting this book—which I consider the greatest trout book ever written because it combines so much information with such a literary voice—was to provide comments that would be used in John’s obituary.

When John died, this industry lost a legend.  He was a master.  He cared very deeply about this sport and the people in it.  He was a mentor and friend.  He never had a problem telling me when I screwed something up.  But as the editor of the original trade magazine, he could’ve kept me, the editor of the newer trade magazine at arm’s length.  As the older fly fishing scribe in the F&S fold, he could have brushed me aside when I entered the picture.  Instead, he coached me, and helped me.  We’d have an annual “come to Jesus” talk every year at the IFTD show.  (Merwin was glad that IFTD combined with ICAST by the way).  Sometimes that was over drinks at the hotel, and sometimes it was sitting on a bench outside the expo hall.  But he made a point to make those conversations happen.  And I will deeply miss those.